Why Some Volcanic Eruptions Don't Have Bigger Climate Impacts 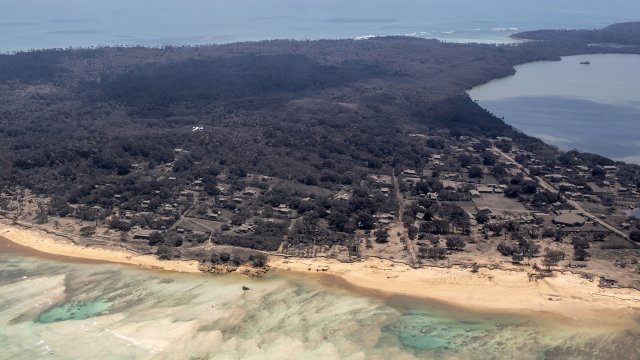 SMS
Why Some Volcanic Eruptions Don't Have Bigger Climate Impacts
By Scott Withers
By Scott Withers
April 15, 2022
Hunga Tonga-Hunga Ha'apai volcano could have ejected more planet-cooling ash when it recently erupted. Scientists aren't sure why it didn't.

Hunga Tonga-Hunga Ha'apai volcano has a major eruption once a millennium. Records show it happened both in the year 200 and in 1100 AD.  Just a few years ago, it spewed out enough lava to join the two original volcanic peaks together, forming the island.

Here’s where its recent eruption was different. The volcano is about a mile tall. Almost all of it, including the vent that releases the erupting lava, is underwater.

Normally, underwater volcanoes don’t make a big splash. The weight and pressure of the water keeps most of the lava and ash below the surface.

But not this time. The vent was only 800 feet under water, and the gas-rich magma fueled the explosion when it hit water, boiling it into steam and sending a plume of smoke and ash from the vent, almost 19 miles high into the stratosphere.

As quickly as it exploded, it ended, just 11 hours later.

The relatively short duration may have helped limit the global damage..

The short eruption time means it only ejected about 400,000 tons of sulfur dioxide into the atmosphere, which is not much compared to the 1991 Mount Pinatubo eruption, which sent 20 million tons into the air over the course of several days.

The sulfur dioxide reflects the sun's rays, which is why the global temperature normally drops after a big eruption.. But not this time.

Scientists are not sure why the massive plume didn’t include much ash or sulfur dioxide, or why it stopped erupting so quickly.

One clue: on the main island of Tonga, there was only a thin layer of ash. When scientists examined it, they discovered the magma was relatively young, which could explain why there was a relatively little sulfur dioxide or ash and why the eruption was pretty short.