Why Some Parents Are Opting Kids Out Of ESL Programs 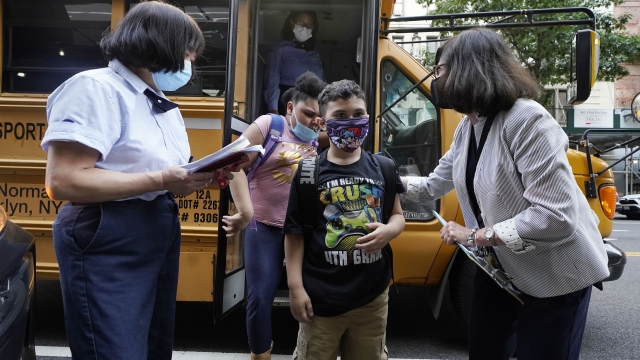 SMS
Why Some Parents Are Opting Kids Out Of ESL Programs
By Axel Turcios
By Axel Turcios
October 7, 2021
Parents across the U.S. say their kids were incorrectly placed in ESL programs and are worried it affects their educational experience.
SHOW TRANSCRIPT

Almost 5 million students in the United States are learning English as a second language.

While the program known as ESL has helped millions of children transition to life in the U.S., some families say their children have been incorrectly placed.

For some mothers, one simple question on a school registration form put their families through years of stress as they struggled to deal with English as a second language proficiency standards.

Tesha Sengupta-Irving's 4-year-old son had to take an English proficiency test at his school in California.

"They asked him questions like, 'What's the right punctuation at the end of a sentence?'" she said. "My son couldn't really read at that point. Little did he know what kind of punctuation went at the end of the sentence. There is no way for a child who's probably even English fluent to be able to pass this exam."

When the California Department of Education administered that same proficiency test to kids from English-speaking homes, 75% failed.

Lisa Garcia Bedolla's daughter — a fluent English speaker — was required to take the test simply because she noted a second language was spoken in their home.

"She's a third-generation Latina in California whose family happens to have Spanish in the home," Bedolla said. "Having another language in the home by the staff leadership in the district was interpreted as being deficient in English."

Carol Lloyd from the nonprofit education organization Great Schools says kids who are placed in the wrong school programs are silently tracked away from advanced learning.

"They're not allowed to even get into advanced math, even though it's math," Lloyd said. "So that prevents them from taking advanced math in high school and that might prevent them from getting into a specific college that they want to study. That can have a long-term implication about their career and their trajectory without the parents actually knowing it."

The situation isn't isolated to California. Betty Cerrato in New York City is frustrated too.

"I think it's based on racial profiling because he spoke English from 3 years old," Cerrato said about her son. "I don't see there's anything wrong with speaking both languages, but they decided to put him in the ESL program."

When Cerrato's son, Mikey, didn't pass that English proficiency test, it flagged him even though his entire family speaks English fluently.

"I think the school should change the way they test the kids because the test they do is very hard for the kids and they start doing them from 4, 5 years old and it's too hard for the kids," Cerrato continued.

However, Mirza Sanchez-Medina from the New York City Education Department says the assessment is fair.

"All students, regardless of race or language, are offered this opportunity," she said. "It's not about their ethnicity or their race. It's about the language component."

In New York City — the nation's largest school system — students who need support in English are classified as English language learners. If the parents feel their child was misplaced in the program, they have a window of time to appeal the decision.

Advocates say parents should be careful if their children speak English fluently, but parents say they should not have to lie about their true identity and that it's the school's responsibility to create a system that is fair to all students.