Why Some Investors Are Buying German Bonds At A Loss 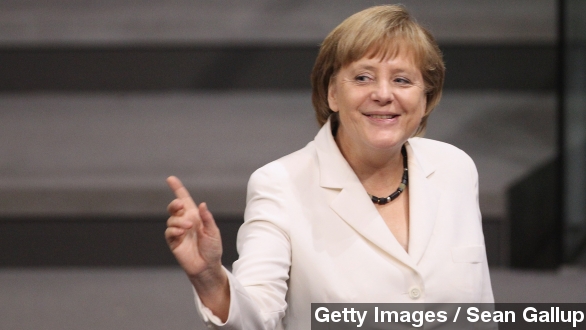 SMS
Why Some Investors Are Buying German Bonds At A Loss
By Kate Grumke
By Kate Grumke
February 25, 2015
Germany's debt is now selling at a negative yield, which means investors are paying Germany so they can lend the country money.
SHOW TRANSCRIPT

In a rare move, investors are buying German bonds at a loss — so they're essentially paying Germany for the opportunity to lend it money.

On Wednesday, Germany issued its first five-year bonds with a negative yield. It sold 3.3 billion euros of debt at a rate of -.08 percent, according to the country's central bank.

"Negative bond yields is a most amazing phenomena. We have seen them once or twice before in past history but this could be the making of a completely new environment for global bond markets and how investors respond," Andrew Milligan, Head of Global Strategy for Standard Life Investments, said.

Inflation in Europe has been falling lately, sparking fears that the region could face long-term deflation — which could lead to a recession. Investors seem to be hoping that the value of German bonds will fall slower than other investments.

And last month, the European Central Bank unveiled a plan to pump cash into Europe's economy by buying 60 billion euros a month in government debt. That stimulus plan could increase the price of these German bonds.

And The New York Times reports that some investors could then sell the bonds for a profit in the short term, despite the negative yield — that is if the European Central Bank's plan works out.

Earlier this month, Finland became the first Eurozone country to sell its debt at a negative yield. Since then, a few other Eurozone countries have joined Finland with negative bond returns.

The European Central Bank's stimulus plan will begin next month.