Why Some Argentines Might Be Wary Of Warming US Relations 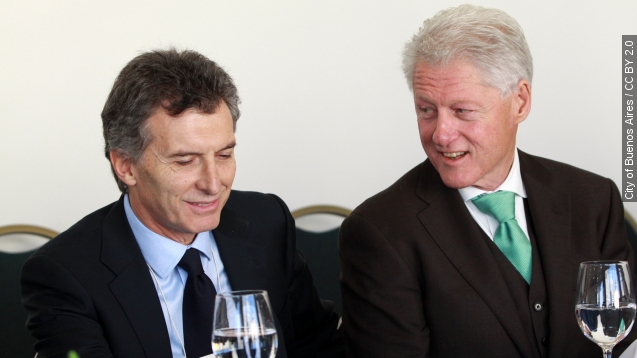 Macri likely knows both of those moves will sit well with U.S. leadership, and reviving the strained relationship between the U.S. and Argentina is one of his goals. But it's one some Argentines might have reservations about.

Argentina's economy is still recovering from the meltdown it suffered more than a decade ago, and Macri's focus has been on boosting growth, through trade. (Video via C5N)

"To export is to export Argentinian labor. To export, is to create jobs in Argentina, it needs to be an absolute priority," Macri said during a panel at the University of Buenos Aires.

Macri's even met with Bill Clinton, who presided over the last spell of good relations between the two countries. (Video via C-SPAN)

That's Clinton with Carlos Menem, president of Argentina from 1989 to 1999. Menem increased privatization and free trade, and even pegged Argentine currency to the dollar to try to fight inflation. (Video via TV Publica Argentina)

That effort, to keep in step with the U.S., ended up weakening the currency and fed the economic collapse.

That, and U.S. support for deeply unpopular International Monetary Fund austerity, soured the countries' relationship under Nestor and Cristina Kirchner.

Now, Argentina is again facing high inflation, and with Macri, it has signaled it's ready for a change. While that might mean better relations with the U.S., Argentines will hope it won't turn out the same way: in crisis.