Why So Many People Think NASA's Asteroid Mission Is A Waste 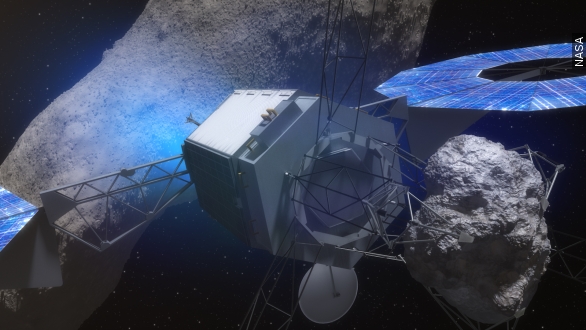 SMS
Why So Many People Think NASA's Asteroid Mission Is A Waste
By Steven Sparkman
By Steven Sparkman
March 26, 2015
The Asteroid Retrieval Mission announced this week bears little resemblance to its grand beginnings. Even NASA scientists are asking, "Why bother?"
SHOW TRANSCRIPT

On Wednesday, NASA announced new details of its Asteroid Retrieval Mission, or ARM. The plan involves capturing part of an asteroid, towing it closer to Earth and sending astronauts to study it up close by the mid-2020s. But here's the thing: a lot of people really, really hate this plan.

To grasp why, we need to go back to the mission's origins: a speech given by President Obama in April, 2010, when his administration was considering canceling a Bush-era program to return humans to the moon.

"I understand that some believe that we should attempt a return to the surface of the Moon first, as previously planned. But I just have to say pretty bluntly here: We’ve been there before," President Obama said.

Instead, the president called for a manned mission to an asteroid as a stepping stone to Mars.

That idea was pretty well received at the time. Asteroids are scientifically important to study, and sending humans out to meet one presented a bold new set to challenges. (Video via NASA)

But when Sen. Bill Nelson announced NASA's plan in 2013, it had been significantly scaled down. (Video via C-SPAN)

Now, instead of flying out to meet an asteroid, the asteroid would be retrieved by a robot and placed in orbit around the moon, making it a much easier target. (Video via NASA)

The new plan didn't match Obama's 2010 rhetoric. In that same speech, he portrayed the asteroid mission as a deep space mission.

"By 2025, we expect new spacecraft designed for long journeys to allow us to begin the first-ever crewed missions beyond the Moon into deep space. ... We’ll start by sending astronauts to an asteroid for the first time in history," President Obama said.

The less-inspiring mission has been slammed by members of Congress, like Texas Republican representative John Culberson, who called it a waste of taxpayer funds. His fellow Texas rep Lamar Smith feels the same.

"The administration continues to push this mission on NASA without any connection to a larger exploration roadmap." (Video via C-SPAN)

And the opposition isn't just political. What's interesting here is that scientific organizations — including one of NASA's own advisory groups — have started questioning the mission's merits.

One group said of the ARM mission, "Its benefits for advancing the knowledge of asteroids and furthering planetary defense strategies are limited and not compelling."

An MIT researcher involved in that report called the whole mission a "distraction," telling Nature it would make more sense to carry out a large-scale asteroid survey to find better targets.

"It's pointless to go and retrieve an asteroid when we can wait for one to come to us," Richard Binzel said.

The National Research Council argued that ARM wouldn't help get humans to Mars, either, and recommended NASA go back to the moon instead.

Even Buzz Aldrin has spoken out against the idea several times.

"I sure do not think bringing a rock back is better than taking what the president said, human mission to an asteroid, 2025," Aldrin said.

It's actually kind of hard to find anyone cheering the project on outside of NASA itself. In fact, it's become downright popular to trash it.

Probably the biggest organization in the pro-ARM camp is The Planetary Society, headed by Bill Nye — and even that group questions the mission's costs.

So will ARM ever actually get off the ground? Congressional Republicans aren't keen on the idea and currently control the purse strings, and even the earliest timetable puts the first launch well into the next president's first term. (Video via NASA)

But if the mission is called off, there's currently nothing to replace it. NASA is developing its Orion spacecraft and its Space Launch System rocket to carry humans into deep space, but aside from ARM, there are no missions in the works for them to actually take astronauts anywhere.

So even if ARM isn't the mission everyone wants, politicians might be loath to condemn the U.S. to another decade without human spaceflight.