Why Seth Meyers Hosting The Emmys Makes Sense For NBC 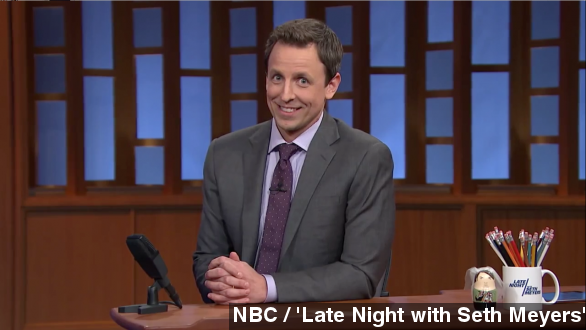 SMS
Why Seth Meyers Hosting The Emmys Makes Sense For NBC
By Laura Heck
By Laura Heck
April 25, 2014
The Emmys will air on NBC, and Seth Meyers of "Late Night" will represent the peacock as the host of the 66th annual broadcast.
SHOW TRANSCRIPT

Seth Meyers is adding yet another hosting gig to his name after taking over the "Late Night" spot. The SNL veteran will host the 66th annual Primetime Emmy Awards in August.

Which isn't a huge surprise. After all, this year's program will air on NBC, so who better to rep the peacock than the late-night new kid on the block? (Via NBC / "Late Night with Seth Meyers")

And of course that means ABC's turn left us with Jimmy Kimmel leading the night. And the year before, "Glee"'s Jane Lynch took a spin on Fox. Are you getting the pattern? (Via ABC / "Jimmy Kimmel Live!," E! / "Chelsea Lately")

But before Jane took the Emmy stage, 2010's broadcast was hosted by NBC funny boy Jimmy Fallon. So why wouldn't Fallon get the gig again?

His "Late Night" hasn't exactly been a ratings smash.  (Via NBC / "Late Night with Seth Meyers")

Still, it's not like Meyers is that much of a gamble. He recently hosted the White House Correspondents' Dinner, not to mention all those years at the "SNL" Weekend Update desk. (Via C-SPAN)

And he was just named one of Time's 100 most influential people, featuring a story about him written by comedy pal Amy Poehler.

And for all you sports fans, this year's broadcast will be held on a Monday night instead of the usual Sunday show in order to avoid interrupting NFL games, which personally, I would not have watched anyway.