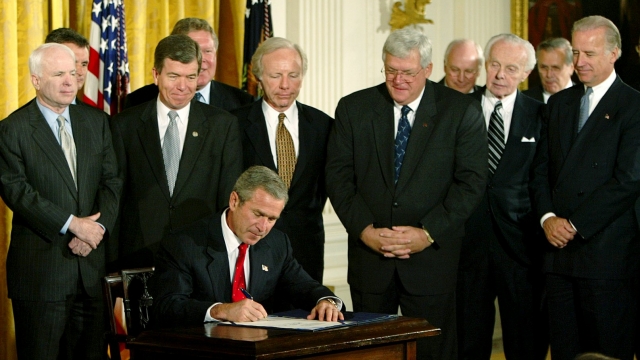 “Contrary to what some in my party might think, Iraq was a problem that had to be dealt with,” Democratic presidential candidate Joe Biden declares, in a clip used in a recent Bernie Sanders campaign ad.

As the race for the Democratic nomination has narrowed to two front-runners, Sanders has stepped up his criticism of Biden's “Yea” vote authorizing the Iraq War.

This week, he released an ad, tweeted, and pointed fingers in a post-Super Tuesday press conference in the senator’s hometown of Burlington, Vermont.

“He was a leader getting us involved in the war in Iraq,” Sanders told reporters on Tuesday.

The war in Iraq, which officially lasted from 2003 to 2011, led to the death of an estimated 4,419 U.S. service members, according to the Department of Defense.

The vote Sanders is talking about took place 18 years ago, during the 107th Congress.

The bill that started the Iraq War prompted contentious debate but passed with bipartisan support, despite opposition from now-House Speaker Nancy Pelosi and then-Rep. Bernie Sanders.

“The United States could set a precedent of a unilateral invasion of a country that could trigger disastrous results,” Sanders declared during a 2002 press conference.

On the Senate side, the bill also received bipartisan support, with 29 Democrats voting to send it to the president’s desk.

Among them: Hillary Clinton, Chuck Schumer and, yes, Joe Biden.

But Biden, in a Senate floor speech the day before the bill passed, said use of force was a last resort.

“... there is no question that with regard to Iraq we have a real and growing problem,” Biden said. “But, I also believe that we have time to deal with that problem in a way that isolates Saddam [Hussein] and does not isolate the United States of America ... and that makes the use of force the final option, not the first one.”

In an interview with Newsy, President Barack Obama's 2008 campaign manager David Plouffe said he thought the vote would play a smaller role in 2020 than it did in 2008.

“It’ll be a factor,” he said. “But I doubt it will be as decisive or certainly as important to voters as it was in our race ... just because of the time that’s elapsed.”