Why Russia Has Struggled In Its Information War In Ukraine 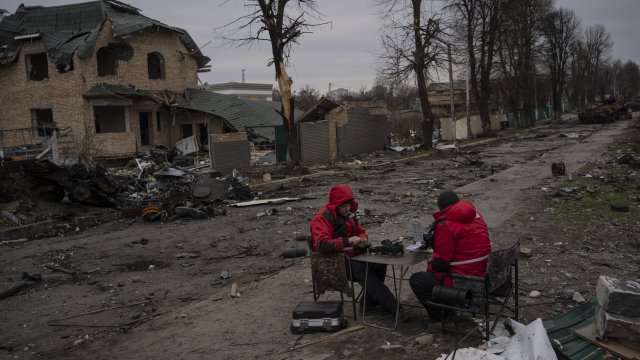 SMS
Why Russia Has Struggled In Its Information War In Ukraine
By Tyler Adkisson
By Tyler Adkisson
April 11, 2022
Russia has strategically tried to target Ukrainian internet providers and knock out their cyber infrastructure, but it hasn't worked.

Since its first days at war with Russia, Ukraine has succeeded in leveraging social media and the press to get the attention and support of countries around the world.

That’s led some to suggest that it’s winning the information war against Russia — an impressive feat considering that many experts see the Kremlin as a global leader in information warfare.

On-the-ground footage showing the effects of war that could be published incredibly quickly has also allowed Ukraine to keep its narrative of the war ahead of Russia’s.

Social media has allowed Ukrainians to constantly document and broadcast the real-time turmoil they’re facing from Russia. Ukraine’s ability to debunk Russian propaganda with images of what’s actually happening on the ground has helped it draw even more global support.

"When Ukraine says there are mass graves in the city of Bucha — almost any of us can turn on satellite imagery that's readily available online, or follow reporting by Western reporters who are there to get a horrifying but firsthand look at what's going on," said Andy Carvin, managing editor of the digital forensic research lab at the Atlantic Council. "But when Russia makes claims of Ukraine purposely attacking its own citizens, they don't offer proof."

"Zelenskyy and the government's ability to appeal to populations around the world, partly through social media, partly through making direct appeals to parliaments of countries, through the United Nations — of being visible and making Ukraine's case — is critical for Ukraine to continue receiving the support that it needs from wealthier countries around it," said Scott Radnitz, associate professor of Russian and Eurasian studies at the University of Washington.

"If you're looking at domestic Russian audiences, Ukraine is not even in the fight," Carvin said. "It's purely Russian messaging, with Russian censors cracking down on social media, arresting people who share truthful information, and then they get charged for spreading fake news."

"This really is a David-and-Goliath story," Radnitz said. "It's not hard to sell that storyline, and Zelenskyy has worked this narrative masterfully. But the truth is, people around the world, social media users, have other things to do. They have more immediate concerns. There will be other short-term crises and eventually attention is going to flag. And Ukraine is going to have to try ever harder to justify why people should care about it."