Why Rainforests Losing Their Smallest Animals Is A Big Deal 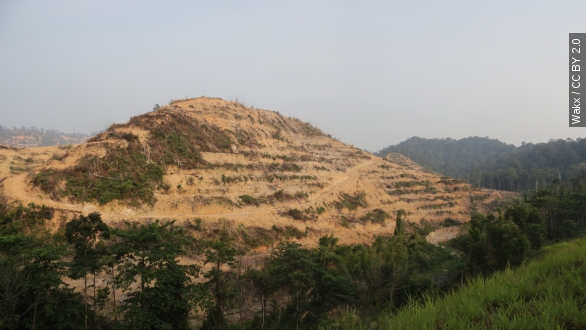 Malaysia has one of the highest rates of deforestation in the world.

On the island of Borneo, close to 80 percent of the Malaysian regions of Sarawak and Sabah have seen high-impact logging, and while the forests are resilient, there's a limit.

Logging has threatened Borneo's most famous resident, the orangutan, but it's also had a profound impact on its littlest inhabitants. (Video via Natural History Museum)

Rob Ewers, along with his colleagues, looked at how logging affects Sabah's forest invertebrates.

Invertebrates play three key roles in the forest's ecosystem. They break down leaves on the forest floor, releasing nutrients; they eat and disrupt seeds, maintaining tree populations; and they eat other invertebrates that could otherwise decimate vegetation.

All of those functions were reduced by logging.

"If you cut out ... all invertebrates, the rate of decomposition drops by about 25 percent," Ewers said.

But there's another important effect. When invertebrates are taken out of the picture, vertebrates step in.

The good news is the vertebrates are able to take over a lot of those invertebrate functions. But the bad news is, there aren't nearly as many vertebrates. (Video via Sabah Forestry Department)

"You go from relying on thousands of species ... once you start relying on vertebrates, you're talking about relying on 30 to 50 species," Ewers said.

"So if you lose one of those species, there's another species on hand that can pick up the job, if you like," Ewers said.

So there's no other plan B: If the forests in turn lose those vertebrates, there aren't really any other animals that can carry out those functions.

The rainforest has been logged for development and to make way for palm oil plantations. (Video via The Seattle Globalist)

Palm oil is used in a wide range of products from food to cosmetics, and its production is highly profitable. (Video via Al Jazeera)

In light of the backlash from environmentalists and consumers, some palm oil companies are trying to minimize their impact on surrounding ecosystems through standards for sustainability. (Video via Greenpeace)

"If anything, I think we'll find the criteria are too weak."

But Ewers is realistic.

"We're obviously never going to get a perfect win where you get to convert to plantation and there's no effect on that ecosystem, but we want to try and work out how we can minimize that impact."

You can find the research in the journal Nature Communications.

This video includes images from Wakx / CC BY 2.0 and Rajeev Pillay, University of Florida.