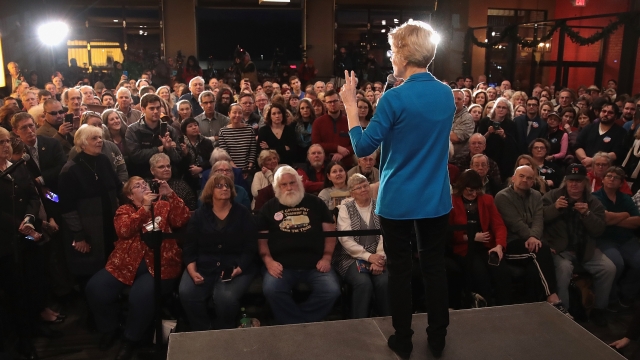 SMS
Why Do Presidential Contenders Launch Exploratory Committees?
By Kellan Howell
By Kellan Howell
January 10, 2019
There can be some key advantages to launching an exploratory committee before starting a campaign, even though they're almost the same thing.
SHOW TRANSCRIPT

When you're running for president, there can be one key advantage to announcing an exploratory committee before officially launching your campaign — even if the two steps have a lot in common.

One similarity: Whether it's your official campaign or the exploratory committee that can come first, you're still legally a candidate, and you have to follow campaign finance rules either way.

That means you have to track and publicly report all donations and expenses, and there are limits on how much money people can give you.

But that also means, either way, you can raise money. Before officially campaigning, both Barack Obama and Mitt Romney raised several million dollars just during their exploratory phase.

You can use that money to conduct polling, travel to meet with constituents or hold rallies, and hire a team — just like you would in an official campaign.

So if they have so much in common, what's the advantage of an exploratory committee? In a word; publicity.

By publicly announcing an exploratory committee and then coming back shortly after that to formally announce their campaigns, candidates get twice the headlines.

And the soft launch gives candidates some flexibility. They can experiment with talking points and strategies before fully committing to a campaign.

Still, it's not a necessary step — and a lot of candidates will skip the exploratory phase and jump right in to official campaigning, like Hillary Clinton and Donald Trump did in the 2016 election.

But for 2020, it could be one more way to stand out in a Democratic field that just keeps getting more crowded.