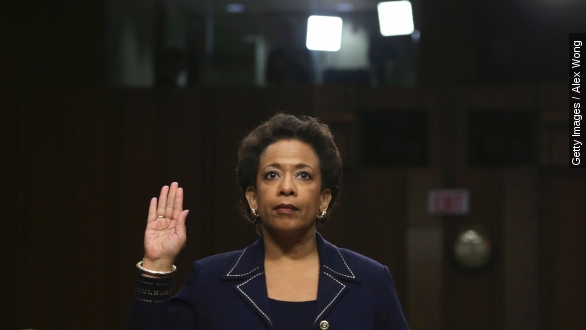 When Loretta Lynch takes over as attorney general, one of her first acts will be a listening tour of the country's police departments. (Video via C-SPAN)

That's according to The New York Times, which says Lynch plans to meet with law enforcement "to strike a new tone for the Justice Department amid a brewing controversy over the use of lethal force."

The Times' sources say she's concerned police departments around the country have been unfairly criticized in the wake of high-profile use-of-force cases like those in Ferguson and Staten Island, and that the departments are struggling with low morale. (Video via The New York Times, NBC)

Officer morale is subjective and sometimes hard to measure, but it's a factor that researchers and police departments agree is crucial to law enforcement operations.

One retired cop told NPR what happens when morale gets low.

"In the simplest terms, officers aren't doing proactive police work. They'll respond to their calls. ... But they're not going out looking for the bad guys."

And all across the country, surveys are finding that morale is very low.

New York City Police Commissioner William Bratton recently told CBS, "Morale in the department at this time is low. There's no getting around that. That's the reality."

Albuquerque's KRQE reported on a survey, finding, "A little more than 99 percent of the union's 456 members who took the survey report APD morale is low."

And Dallas' Police Association President told KDFW, "Eighty percent of them, their morale was as low or the lowest it's ever been since they've been a police officer."

That's not exactly a new phenomenon. Police websites are full of articles and guides on boosting morale, and police morale has been a constant theme in local newspaper reporting for decades.

But aside from feeling smeared by the media, the other factors often cited in studies of morale include things like pay, overtime, equipment and — probably most importantly — a belief that their department is run fairly, and that the people at the top aren't playing politics.

Attorney General Eric Holder gained a reputation among law enforcement for being quick to criticize and not having officers' backs. He called himself a proud activist, which didn't sit well with many police departments. (Video via U.S. Department of Justice)

New York Mayor Bill de Blasio has the same problem. Officers literally turned their backs on him after he praised the protests over the death of Eric Garner. (Video via CNN)

Luckily for Lynch, she doesn't have that reputation. Her nomination was backed by organizations like the International Association of Chiefs of Police.

Profiles of Lynch have said that, although she also has a civil rights activist past, she views the attorney general position as being more about prosecution and less about activism.