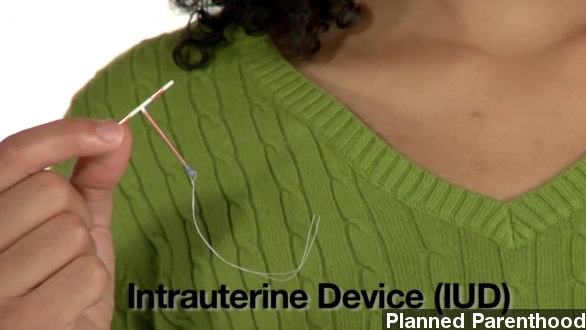 By Christine Slusser
September 29, 2014
New recommendations from the American Academy of Pediatrics point to intrauterine devices and implants as good forms of birth control for teens.
SHOW TRANSCRIPT

The American Academy of Pediatrics says its top choices for teen birth control are implants or intrauterine devices.

An implant goes under the skin of the arm. These devices are effective for years before replacements are needed.

The intrauterine device, or IUD, is implanted in the uterus, and it also lasts for years.

Both are birth control methods teens wouldn't have to worry about "remembering." (Video via Planned Parenthood)

Keep in mind we're talking about teens here. They're still children — both legally and to their parents, too. In most states, the legal age for an adult is 18. Each state also has varying "ages of consent" when teens are able to consent to sex. The age varies between 14 and 18.

So why is AAP recommending this for a group that technically includes children? Well, mainly because it says anything is better than pregnancy at a young age. The group adds:

"Pediatricians are also encouraged to promote healthy sexual health decision-making, such as abstinence and proper condom use."

KTVU: "It also says IUDs are cheaper over the long run."

And that's a modest example, as the device can last up to 12 years. But something already seems to be working to prevent teens from becoming parents.

The Office of Adolescent Health says in 2013, the birth rate among teens was 26 out of every 1,000 — so 2.6 percent. It also notes over the past 20 years, there has been a continuous decline in teen births.