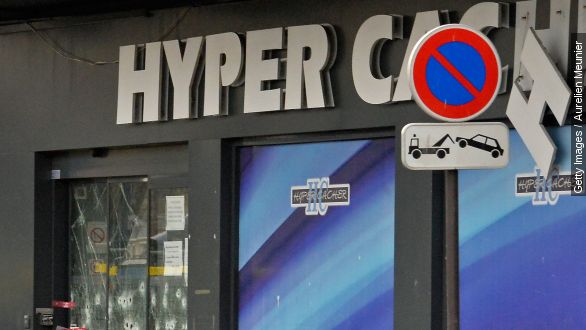 SMS
Why Paris Hostage Survivors Are Suing French Media
By Jake Godin
By Jake Godin
April 3, 2015
Survivors of the hostage situation in Paris earlier this year in January are suing French media outlets for risking lives with their live coverage.
SHOW TRANSCRIPT

Six survivors from the Paris supermarket siege are suing the French media. The reason? The coverage.

The hostage situation in eastern Paris was front and center in the French media as the situation progressed earlier this year in January. (Video via BFMTV)

But six hostages who were hiding in a walk-in freezer are suing French media for revealing their location as the situation was still ongoing and for giving live updates on police movements. (Video via France Télévisions)

The gunman, Amedy Coulibaly, was apparently unaware of those hiding within the store’s freezer while he was holding the rest of the people hostage.

The hostages accuse the media, specifically French station BFMTV, of revealing their location during their broadcasts and “endangering the lives of others.” (Video via BFMTV)

The reason broadcasting live information on the whereabouts of hostages or the police is dangerous is because Coulibaly was watching the news during his last stand. Had he heard news of the hostages hiding in the freezer, they may have been put in grave danger.

BFMTV editorial director Hervé Beroud admitted his reporter made a mistake during an interview on Canal+ on March 26, calling the reporting of the detail "inappropriate."

The lawyer representing the hostages, Patrick Klugman, was a little more harsh with his words, saying the broadcast "lacked the most basic precautions" by reporting the hiding location.

Klugman’s argument does have merit. There are established guidelines — these come from Poynter — advising journalists covering hostage situations to always assume a hostage taker has access to reporting and to avoid giving away police locations.

The coverage of another hostage situation in Sydney in December received some criticism for how it was reported as well. A columnist at The Brisbane Times deemed the Australian media’s coverage as dangerous. (Video via ABC Australia)

According to the French paper, Le Parisien, the complaint over French media was filed on March 27. Under the article for which the complaint was filed, a person would be fined about $16,800 if successfully sued.

BFMTV, i>Tele, France 2 and France 24 were among the various outlets warned by the Superior Audiovisual Council, a French TV-watchdog agency, for the amount of information they’d broadcasted during the siege.