A Growing Number Of Police Departments Are Outsourcing Their Policies 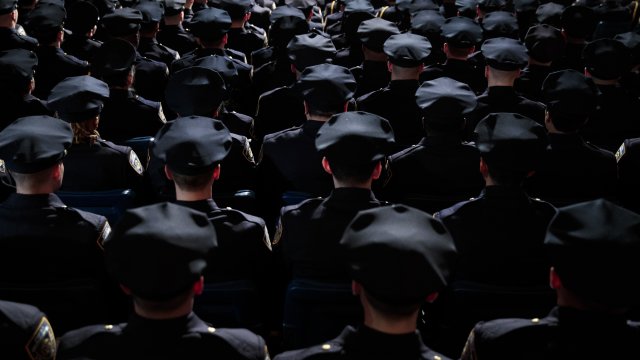 SMS
A Growing Number Of Police Departments Are Outsourcing Their Policies
By Jamal Andress
By Jamal Andress
July 29, 2019
From use of force to body cameras, one private for-profit company is writing policy for thousands of America's police departments.
SHOW TRANSCRIPT

On June 16th, 54-year-old Eric Logan was shot and killed by former South Bend Police officer Sgt. Ryan O'Neill. O'Neill was responding to a 911 call reporting car break-ins when he confronted Logan. O'Neill says Logan approached him with a knife when he opened fire.

Since the shooting, Buttigieg's civil rights record has been scrutinized, from the racial makeup of his local police force to the policies of the South Bend Police Department.

Samuel Sinyangwe is a policy and data analyst focused on police reform. He's reviewed hundreds of law enforcement policies across the country, including South Bend, Indiana.

SINYANGWE: "The policy was less restrictive on how and when police officers can use force, including deadly force, compared to the average across the country. And as you know, the average across the country is also woefully inadequate. ... Police departments that require de-escalation are 15% less likely to kill people than police departments that do not require de-escalation. What we found in looking through South Bend policy was that they did not require officers to use de-escalation."

South Bend PD and thousands more police departments across the country buy pre-written policy manuals from a for-profit company called Lexipol. While the police are ultimately responsible when carrying out this policy, activists and onlookers worry about how much power a private company has in how public safety officers do their jobs.

SINYANGWE: "There were some shortcuts taken by the city of South Bend to write their policy that many cities across the country are taking but that, frankly, are not consistent with a commitment to ending police violence. What they did was they decided to contract with a private corporation called Lexipol to write the policy for them. … Lexipol is a company that makes money selling policies to police departments."

Sure enough, at the bottom of every page of South Bend's police department policy manual is "Lexipol LLC." Lexipol is by far the largest policymaker in American policing. The company has grown from partnering with 40 California-based public safety agencies in 2003 to more than 3,500 agencies — police, fire, and corrections and probation — across 35 states in 2019.

UCLA professor Joanna Schwartz co-authored "The Privatization of Police Policymaking," examining the reach and practices of Lexipol. In her article, Schwartz calls Lexipol "the single most influential actor in police policymaking."

SCHWARTZ: "When Lexipol makes a decision about, for example, whether to allow officers to review body camera footage before testifying. When they decide the rule should be that they should be allowed to review that footage, then it becomes policy in 3,000 law enforcement agencies in a moment, based on their decision."

Bill McAuliffe is the director of professional services for Lexipol and a former law enforcement officer.

MCAULIFFE: "If you want a group of people, let's just take a police department, to operate within the law — which, the law protects people's civil liberties — then you want to have good solid policy. ... It's not about, 'Hey chief, we can keep you from getting sued.' Or, you know, some slimy way to get out from underneath a lawsuit. It's, 'No, hey, Chief, we can help you have solid policy, help you train your people so that they're treating your citizenry properly, the way you want them to be treated, the way they deserve to be treated. And therefore, if they're treating them properly and within the law and everything else, then you're not going to get sued.'"

But in many cases, Lexipol refuses to go beyond what is considered "settled law," which can leave Lexipol's policy manual out of step with what community members or even other law enforcement organizations recommend. For example, when 11 national law enforcement organizations, including the Fraternal Order of Police, wrote the "National Consensus Policy on Use of Force," Lexipol's co-founder shot it down.

In a way, McAuliffe agrees with Sinyangwe that policymaking is a collaborative process. But the individual agencies are responsible for making these subsequent changes.

MCAULIFFE: "This is not a boilerplate process. … The whole philosophy of Lexipol policy content is we give them a solid foundation of well-written, legally researched and vetted policy. And then the agency needs to take it the next step and customize it to make sure that it's applicable, practical and functional for their organization's purposes."

From use of force to body cameras, a lot of Lexipol's strategy rests on the action or inaction of local departments. But Schwartz points out Lexipol provides some mixed messaging here.

SCWARTZ: "If you go on Lexipol's site, you will see testimonials from chiefs and small agencies who talk about their ability to relax knowing that Lexipol has them covered. That they know that their policies are legally sound. The message that sends is that if you subscribe to Lexipol, your work is essentially done. And on the other hand, they describe their policies as just the first step, as you said, in a larger policy-making process."

Lexipol explains whenever it issues changes to a department's policy manual that department has to accept, customize or reject the change before it becomes effective. But it couldn't tell us exactly how many police departments accept changes versus customizing their own or how substantive those customizations are.

For now, the South Bend PD will not grant Newsy an interview or issue a statement to discuss its relationship with Lexipol or the shooting of Eric Logan. Logan's family has filed suit against the city of South Bend, and Sgt. Ryan O'Neill has resigned from South Bend PD. And while a special prosecutor is investigating the shooting, no criminal charges have been filed against Sgt. O'Neill.