Why One Former Border Agent Is Facing Deportation 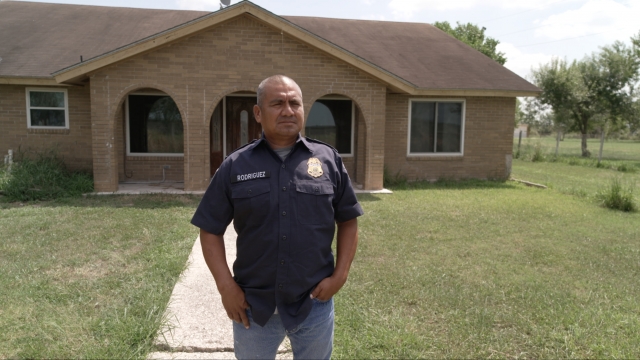 SMS
Why One Former Border Agent Is Facing Deportation
By Ben Schamisso
By Ben Schamisso
October 6, 2021
His citizenship application was denied — and his deportation case has been postponed until at least 2022.
SHOW TRANSCRIPT

One border agent who spent nearly 20 years proudly enforcing the laws and deporting undocumented migrants at the U.S. - Mexico border is now fighting against his own removal — after finding out his whole life was built on a lie.

A 17-acre ranch in South Texas is Raúl Rodriguez' piece of paradise.

It's his life accomplishment and his retirement dream. But it could all be taken away from him in a blink of an eye.

"If I get deported, my wife will be forced to sell and my dream will be gone," he said. "The American dream is gone."

"I always liked the uniform," he said.

Now he fears he'll be the one being deported.

"It does hit a nerve there," he said. "I'm now gone into hiding when I was enforcing these laws."

Like those he used to deport, he fears getting picked up any time he leaves his property near the U.S. - Mexico border.

"As soon as I leave my house, there's officers everywhere," Rodriguez said.

Still, he sometimes meets up with former colleagues at a restaurant nearby.

"I've worked with you for, I don't know how many years – at least 10 or 15 years. You were a very good officer and did your job better than most guys," one former Customs and Border Protection colleague said about Rodriguez.

After half a century living in the U.S., he's never doubted he was a citizen. He even served in the U.S. Navy for five years before his immigration career.

It all came crashing down in 2018 when investigators confronted him with a Mexican birth certificate.

"I just felt my blood go down on my feet," he said.

Rodriguez, it turned out, was born in Mexico. He says he never knew.

His family had arranged for a midwife to register a false U.S. birth certificate — a common practice back then for Mexican parents wishing a better future for their kids.

"I always hid it from him," Raúl's father, Margarito Rodriguez said. "Now that he's in limbo, I'm ashamed. May he forgive me."

Rodriguez was fired right away.

He's been jobless and undocumented ever since. His citizenship application was denied — and his deportation case has been postponed until at least 2022.

Ben Schamisso: "What would happen to you if you got deported?" Rodriguez: "If word gets out who I worked for, they would probably kill me and the cartels would find me."

The border agency declined to comment on Rodriguez' case.

But Rodriguez' attorney argues his client is innocent because he was oblivious to his parents' lie.

"The only way you can be charged with a false claim is if you knew that it was false," said immigration attorney Jaime Diez. "We're wasting our taxpayer's money going after him like he's the worst criminal."

As an immigrant agent, Rodriguez oversaw the deportation of thousands of people. Now he's using his insider knowledge to help fellow men and women without legal status who also served in the armed forces.

Rodriguez says his wife's mental and financial support has helped him carry on.

"I'm not going to abandon him, certainly not like everybody else has in his life," Anita Rodriguez said.

Anita still works for Homeland Security – the same department that is trying to deport her husband.

"Veterans – if they've served in the U.S. military – they deserve to be in the U.S. no matter what," Rodriguez said.

Through his trauma, Rodriguez says he has become a better, more compassionate man.

"I was a very angry man while I was working for CBP," he said. " I was becoming somebody that I didn't like."

He has recently started talking again to his dad on the phone.

Soon he hopes to be able to forgive him too.