Why NYT's 'No Angel' Label For Michael Brown Touched A Nerve 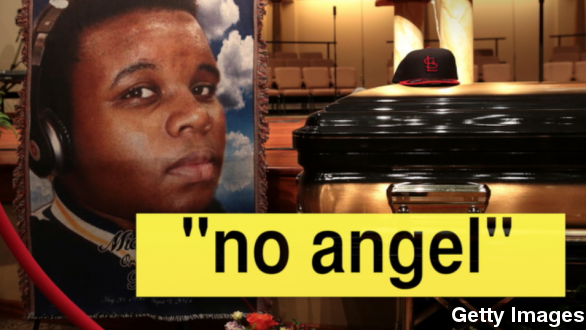 The New York Times is standing behind a profile of Michael Brown that appeared on page one Monday.

The article opened with details on Brown's recent interest in the Christian faith, then transitioned into the black teen's biography, referring to him as, "no angel."

It seems an innocent enough descriptor, if not for the context — that Brown was unarmed and shot six times by a white officer in a town rife with racial tension.

Many readers found the Times' portrayal of Brown inappropriate, considering it came on the day of his funeral and seemed to impugn his character based on the actions of his youth.

One consistent theme in the outcry since Brown's death is the accusation that the media treats black and white youths differently.

Soon after the shooting, Twitter users tried to shame news outlets by posting side-by-side photos of themselves, one flattering and one not so much, and asking, tongue in cheek, which one would make the news "if they gunned me down."

A writer for Mic says the Times ran afoul of this mistrust of the media. "White offenders, regardless of their circumstances, are often portrayed as individuals with promise and potential who somehow, somewhere, took a wrong turn. In contrast, black Americans are born already on parole, destined for a life of criminality and destitution."

Not helping matters is the Times' track record in the use of that phrase, "no angel." It places Brown, a victim, in the company of criminals — some of them quite notorious.

Other subjects the paper has described that way: Al Capone, Nazi Field Marshall Erwin Rommel and a convicted murder and rapist.

Talking to Sullivan, the original article's author John Eligon who is himself black, admitted the choice of words was regrettable but also said, “We wanted to tell the story of who he was, the deeper story,” and that the profile overall reflected positively on Brown.