Why Netanyahu's Visit To Washington Is Proving So Divisive 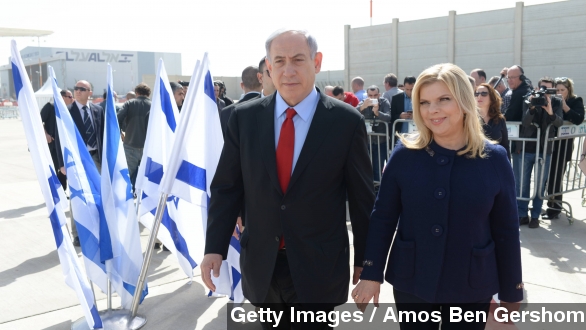 "I'm going to Washington, because as prime minister of Israel, it's my obligation to do everything in my power to prevent the conclusion of a bad deal that could threaten the survival of the state of Israel," Israeli Prime Minister Benjamin Netanyahu said.

Netanyahu's big speech in Washington is set for Tuesday, and for the prime minister, it's a "fateful, even historic, mission" to avert a nuclear deal with Iran.

Netanyahu has repeatedly called the pending agreement spearheaded by the Obama administration "a bad deal," one that could potentially pose an existential threat to Israel. (Video via The White House)

Considering the administration has criticized Netanyahu's visit — planned by House Speaker John Boehner — it's not surprising that on the same day Netanyahu arrived in Washington, Secretary of State John Kerry left to meet with Iran's foreign minister in Switzerland. (Video via ABC)

The divisions here aren't just between the White House and Netanyahu — there's a split down party lines here, too, with some Democratic lawmakers saying they'll skip the speech. (Video via Democratic Caucus of the U.S. House of Representatives)

And the speech has split opinions at home in Israel, with a group of former Israel Defense Forces and Mossad commanders saying Netanyahu's speech could actually damage Israeli security by endangering the U.S.' support. (Video via Commanders for Israel's Security)

So with all of these risks, why would the prime minister go through with this speech now? Well, he says he has a deadline.

"The deadline for reaching an agreement with Iran is March 24; that's the date that drives the speech. Now is the time for Israel to make its case, now before it's too late," Netanyahu said.

But there's another date critics say Netanyahu might have in mind, and that's March 17, when Israelis head to the polls for the country's next parliamentary election. (Video via CCTV)

Netanyahu has been campaigning hard on the issue of security, pointing to security threats like ISIS in his campaign ads, and urging European Jews to emigrate after terrorist attacks there.

Still, some critics say the prime minister's interests go beyond the upcoming election and have more to do with ties to the Republican party.

J Street's Alan Elsner told Voice of America, "The only logical explanation is that he's just written off this White House and this president and he's decided to throw his lot in with the Republicans on Capitol Hill."

This video includes an image for Getty Images.