Why Mo'ne Davis Playing In The MLB Isn't Crazy 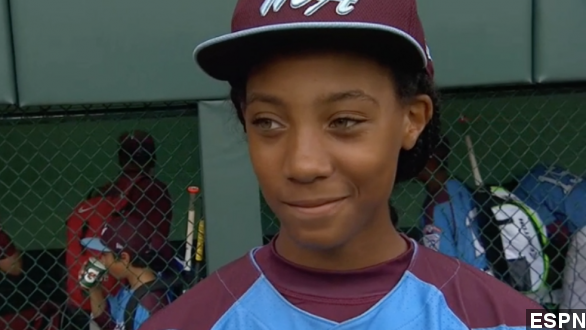 SMS
Why Mo'ne Davis Playing In The MLB Isn't Crazy

But it'd be kind of silly to not acknowledge the fact that Davis made history Friday, becoming the first girl to pitch a shutout and the first girl to win a game at the Little League World Series. She allowed only two hits and struck out eight batters, helping lift her team to a 4-0 win over Nashville.

That fastball has gotten the attention of some MLB players. No "A League Of Their Own" jokes. Only comments like, "Awesome mechanics and great feel for pitching," "Props to Mo'ne Davis for dealing today," and "Am I watching my pitching style right now?"

Davis told Bleacher Report things weren't so hot when she first started playing baseball at age 7. "Well, my very first year I wasn't the best, but I kind of got better. The next year, that's when I was really starting to get better."

Davis is just barely a teenager and told reporters she has aspirations of playing professional basketball. But if she continued with baseball, what're the chances of her playing in the MLB?

Sports writers have argued over the years about what it'll take to see that happen — talent, opportunity, etc. But if there are women in the MLB, they might break the barrier from the mound. An SB Nation writer explained his reasoning in 2013 saying, "pitchers seem to have the widest range of body types, from Jonathan Broxton to Tim Collins, and the most specialized skillset."

Just recently, 17-year-old Chelsea Baker was in the spotlight. Baker, a knuckleballer, is the youngest female to ever pitch at a batting practice, according to ESPN. Writer Jim Caple says, "Someday, there will be a woman in the majors with a nasty knuckler. And she won't be throwing just batting practice."

In the meantime, though, Davis says she knows the impact of her presence. She says soon enough, there will be more girls which means there will have to be more female dorms to accommodate those female players.