Why Millions Are Listening To The Podcast 'Serial' 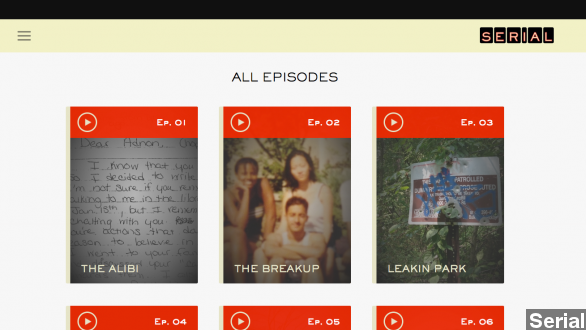 SMS
Why Millions Are Listening To The Podcast 'Serial'
By Evan Thomas
By Evan Thomas
November 15, 2014
'Serial' tells the story of a murder investigation, and addresses ethical questions of crime and entertainment along the way.
SHOW TRANSCRIPT

The story told in "Serial" is real, but it plays out like a crime drama.

The podcast, a spinoff of WBEZ's "This American Life," follows host and executive producer Sarah Koenig’s investigation into a murder conviction from a 1999 strangling death.

It’s on track to be the most popular podcast in the world, and listeners have already downloaded its episodes more than 5 million times — the fastest iTunes has ever seen that happen.

Slate even has a podcast about the podcast — a meta-review that airs each week after the latest episode.

So what is it about this story that triggers such interest? And why is the media climbing aboard, too?

The short and long of it is it’s real — a compelling account of actual events, and also a way for listeners to access the thought process behind Koenig’s reporting and journalistic investigation. They’re along for the ride, not just seeing the finished product.

The Guardian writes “The murder case is enthralling by itself, but the real public service she’s providing is running the world’s most accessible media studies course.”

The Denver Post agrees: “‘Serial’ is compelling as a search for truth. But it may be more riveting as an examination of storytelling. Hearing Koenig's account is like seeing raw, unedited reporters' notes.”

Along with the praise is concern. Other outlets point to a possible ethical gray area of building a real murder case into such riveting entertainment.

But The Atlantic argues that’s just "Serial" doing its job: “the ethical questions it raises about crime reporting and the treatment of victims in the media are the ones we should already be asking.”

Serial is expected to run 12 episodes — but due to the nature of the open investigation it could run longer. Each episode is available as it airs on iTunes and on Serial’s website.