Why Marshawn Lynch, Other Athletes Trademark Their Phrases 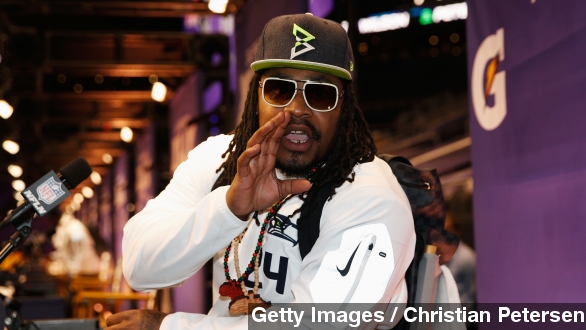 Marshawn Lynch had his share of fines to pay off last season, so he's turning to his own words to help out.

"I'm here so I won't get fined," he answered repeatedly at a press conference.

That's all Lynch would say during an NFL-required Super Bowl interview this year, and the phrase caught on with just about everyone.

Now, Lynch is looking to cash in by trademarking the phrase.

The Seattle Times reports Lynch has filed the request with the U.S. Patent and Trademark Office to prevent others, aside from him, from profiting off the phrase on T-shirts, hats, jackets and more.

Lynch has done this before. His last time at Super Bowl media days, his phrase "about that action, boss" caught fire.

Now, you can buy "About That Action" T-shirts at Lynch's Beast Mode online store.

"Beast Mode" is hardly the first one to trademark a phrase, though.

These are just a few other names or phrases professional athletes have filed trademarks for:

-"Stomp You Out" (Michael Strahan)

Trademarking your brand or name has been around since 1946, but it's been more and more popular over the past few years.

In a 2010 article, The New York Times writes, "Several lawyers for athletes said their clients were following in the footsteps of pioneers like Michael Jordan, who beyond endorsing products built a personal brand empire."

Jordan is well-known as one of the most lucrative commercial athletes of all time with endorsement deals from McDonalds:

And much more. He even made $90 million in 2013, according to Forbes, from endorsements and hasn't played professional basketball in more than a decade.