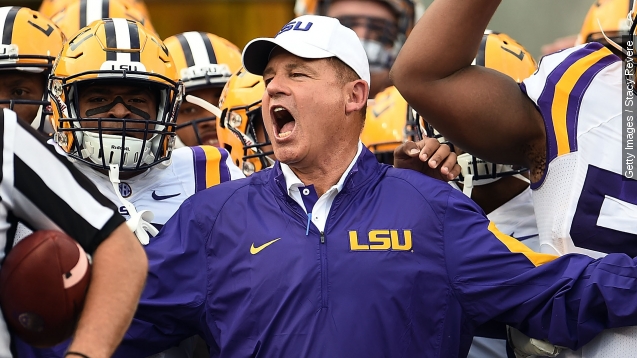 SMS
LSU Firing Les Miles Makes More Sense Than You Think
By Matt Moreno
By Matt Moreno
November 24, 2015
LSU boosters are ready to buy out head coach Les Miles for $15 million, according to reports. The Tigers are 7-3 after three straight losses.
SHOW TRANSCRIPT

LSU head football coach Les Miles could be out of a job by the end of the week, according to several reports out Monday.

To the casual football fan, this comes as a shock. LSU is 7-3 this season, and their worst finish under Miles is 8-5. That's respectable for most college football programs. (Video via WVLA)

"If someone's asking me if I'm coaching for my job, I think I've done that for the last 11 years," Miles said in a press conference.

"It's also the comparison to Alabama and Nick Saban. Those two things in the same division of the same conference have hurt him because he hasn't measured up recently," ESPN analysts said.

LSU hasn't appeared in an SEC title game since 2011. And the Tigers haven't fared well against the Crimson Tide in recent years. LSU lost its last five matchups against Alabama.

But isn't 10 (soon to be 11) straight bowl games and having the most active players on NFL rosters enough for a man to get some respect?

"There are not a lot of Les Miles out there. I think you've gotten spoiled down there in Cajun country," Fox Sports' Colin Cowherd said.

It would reportedly cost LSU $15 million to part ways with Miles. Not a bad severance package for the coach.

This video includes images from Getty Images and statistics from Sports-Reference.com.