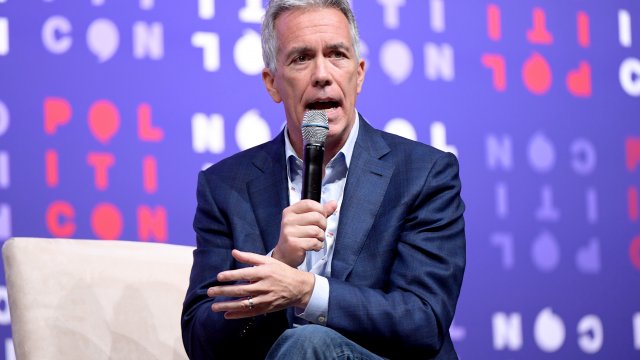 You may not know him but Joe Walsh is one of two Republicans vying to take on President Trump in 2020. And right now he's waiting in the lobby of the Republican National Committee headquarters in Washington, D.C. because no one from the GOP apparatus has answered his messages.

Because I’m running against him, nobody here will even say hello to me.

Walsh has a major gripe with the RNC for appearing to stand behind the states who have canceled their GOP primaries.

So far, 11 states, including South Carolina and Nevada, have scrapped their Republican primaries and caucuses, while other state parties have put in place new rules that make it more difficult for a candidate to get on the ballot to challenge the president.

Right now, this party, my party, is disenfranchising millions of republican voters around the country. Who gives a damn if you’re saving a few hundred thousand dollars?

But canceling nominating contests is not unusual for the party of the White House incumbent. South Carolina canceled its primary in 1984, when Ronald Reagan was running for re-election, and in 2004, when George Bush was seeking a second term. Iowa canceled its caucuses in 1992, when Pat Buchanan mounted a challenge from the right to President George H.W. Bush.

Democrats have used the tactic too. The Arizona Democratic Party did not have primaries in 2012 and 1996, when former Presidents Barack Obama and Bill Clinton were running for a second term.

Newsy has reached out to the RNC for comment but hasn't heard back. The RNC previously argued that it does not decide which states hold nominating contests.  That decision is left up to the states.

President Trump, for his part, has previously criticized the Republicans who have mounted challenges against him.

They're a joke. They're a laughing stock.

Polls of the GOP primary race have suggested that Walsh’s campaign has largely failed to gain traction among Republican voters, so it’s likely that having more primaries probably wouldn't help his campaign all that much.

But despite his low polling and the less than warm welcome his campaign has received from the GOP machine, Walsh said he has no plans to pursue a third-party bid.

I did this because I think it's important for a Republican out there everyday to bring attention to Trump's unfitness. I want to stop Trump and I'm a lifelong Republican so I want to keep doing this.