Why Is Women's U.S. Soccer So Much Better Than Men's? 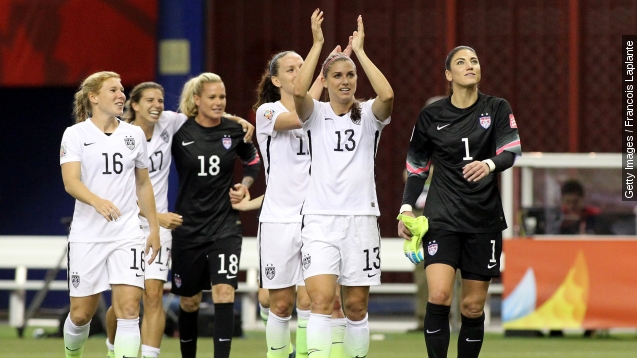 SMS
Why Is Women's U.S. Soccer So Much Better Than Men's?
By Christian Bryant
By Christian Bryant
July 1, 2015
The U.S. women's team made it to the finals for the fourth time in seven World Cups, further proving they're better than the men's team. But why?
SHOW TRANSCRIPT

The U.S. women's team has made it to the finals four times in just seven World Cups — winning twice.

The men have never made it that far; 20 World Cups, zero finals appearances.

"Our expectations have to go higher now. We have to raise the bar," U.S. Men's National Team head coach Jurgen Klinsmann said.

Why are the women so much more dominant?

One theory: In the U.S., great female athletes are more likely to choose soccer over other sports.

"I started playing soccer in the '70s because of Title IX and that got women to be able to be into sports more than being a spectator," one woman told Al Jazeera.

Title IX, signed in 1972, helped provide funding for women's sports in schools. And that meant more women in sports.

Participation in women's soccer has risen ever since. FiveThirtyEight takes it a step further by suggesting soccer is siphoning women from other sports in the U.S. and is gaining a "disproportionate share of 'new' female athletes." (Video via U.S. Soccer)

Statistics from a FIFA survey show that more than half the women that play soccer around the world are from the U.S. and Canada. Strength in numbers, right?

As for the men, the sport hasn't caught on as quickly. NFHS numbers show U.S. high school boys are still choosing football, basketball, baseball and track and field over soccer.

And you can't rule out previous women's World Cup performances for spurring young girls to get involved. Sort of a "success breeding success" thing.

"We want to be treated like the men," U.S. Women's National Team captain Abby Wambach said.

In general, women's teams are still fighting to be treated as well as men's teams. But on the pitch, at least in the U.S., the battle of the sexes has already been won.