Why Is Whole Foods Rating Its Organic Produce? 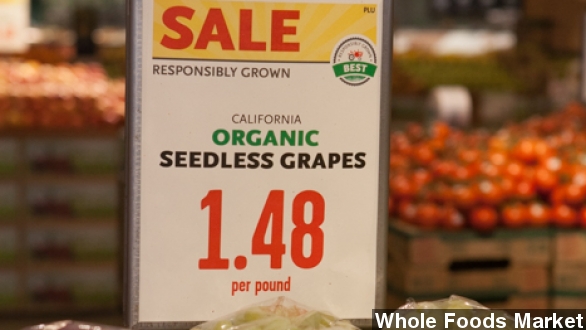 SMS
Why Is Whole Foods Rating Its Organic Produce?

By Jasmine Bailey
October 15, 2014
Whole Foods Market will use a rating system of "good" to "best" for its organic produce and flowers, at a time when the chain has more competition.
SHOW TRANSCRIPT

CBS: "The supermarket chain is introducing a program that labels its fruits and vegetables as good, better or best. The new system will also ban the use of several common pesticides."

The program is called Responsibly Grown. In a statement Whole Foods explained it "seeks to reward growers for existing accomplishments and raise the bar to encourage continuous improvement while minimizing additional burdens for growers." It added, "We are excited to ... drive more transparency in the industry."

Wednesday the changes were made in the nearly 400 Whole Foods Markets throughout the U.S., Canada and the United Kingdom.

So about that rating system — how exactly does it work? Well, the company considers several factors when deciding what's good, better or best.

Whole Foods Market: "We seek out farmers and growers who maintain the highest standards and that are providing safer working conditions for all the people that plow, plant and pick all the produce and flowers. We're committed to sharing that knowledge with you."

​As this graph shows, the good rating means the growers use basic practices like staying away from pesticides. Better goes a step further, supporting conservation efforts, and best implements all those practices plus takes environmental protection into consideration.

Lady Moon Farms is one of the produce companies carrying that "best" rating. Its founder explained: "Being truly sustainable means more than just not using harmful chemicals. Energy conservation is a big focus for us so we installed solar panels."

But as many outlets are pointing out — the timing of Responsibly Grown was likely carefully strategized.

Just a week before Whole Foods' announcement, Business Insider reported Trader Joe's sales have now doubled those of Whole Foods. The outlet explains price, of course, is the biggest contributor. "Consumers view Trader Joe's as high-quality but inexpensive. Meanwhile, Whole Foods is seen as being too expensive. The grocer even earned the nickname 'Whole Paycheck.'"

Ouch. But hey, the numbers don't lie, and at this point they're screaming that Whole Foods has some work to do.

The grocery chain has tried other methods to stay popular with consumers, though. In mid-September it rolled out a rewards program. It was supposedly something shoppers had been asking about for quite a while. There's been no word yet on the results of that effort, but it's still pretty new.

When it comes to the Responsibly Grown program, prices are not expected to change based on a product's rating, but the company has said the idea is that "such labeling typically helps boost sales because people feel better about what they’re buying."