Why Is President Obama Spending So Much Time In Alaska? 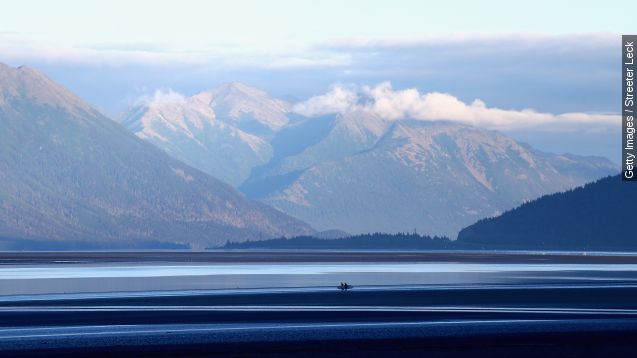 By the end of President Obama's scheduled tour of Alaska, he will have spent more than three days in the state. That might not seem like much, but it could be his longest presidential visit so far this year. So what makes Alaska so special? (Video via KTVA)

In short: its geography and its politics.

Way up at the top of North America, Alaska is the only U.S. state in the Arctic Circle, which brings its own challenges.

Lately, the biggest of those isn't the cold, but warming. Alaska's doing it twice as fast as the rest of the U.S. (Video via National Science Foundation, Greenpeace)

That's in keeping with the rest of the Arctic, where that warming is driven by something called feedback. (Video via NASA)

The more it warms, the more water is exposed to sunlight. Ice reflects that energy, but water absorbs it, leading to more warming.

What that means for Alaska is a lot of melting glaciers and thawing permafrost. And it also means it's the perfect example to make the president's case that climate change is already a grave threat. (Video via PBS)

"If we do nothing, temperatures in Alaska are projected to rise between 6 and 12 degrees by the end of the century," the president told the GLACIER conference.

But that's where Alaska's politics come into play. Both of Alaska's Republican senators have pushed the president not to discount the state's energy options. Which is to say: oil. (Video via Senate Energy and Natural Resources Committee)

They're against the president's proposal to rule out drilling in environmentally sensitive areas, like parts of the Arctic National Wildlife Refuge. (Video via The White House)

"We love our wilderness, but we don't think there should be any more and neither did the Congress," Alaska Sen. Dan Sullivan told Fish and Wildlife Director Dan Ashe.

Which means Alaska isn't just a case study in the effects of climate change, it's also a great example of the universal conflict climate change brings: balancing the long-term environmental costs with the short-term economic costs. (Video via Lindblad Expeditions-National Geographic)