Why Is Netflix Baiting Viewers With Spoilers? 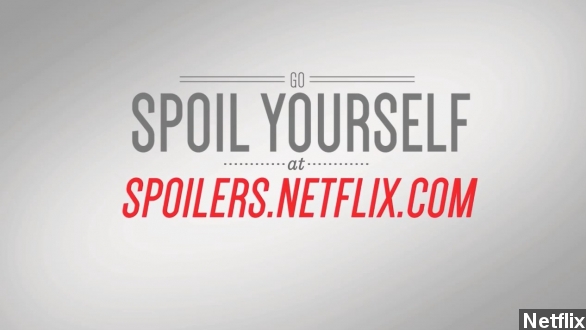 Netflix has created a website where people can watch clips revealing major plotlines from some of the shows and movies it streams. But why?

The site is called Spoil Yourself, and just in case viewers don't know what they're getting themselves into, the site warns you upfront, "What you are about to see cannot be unseen."

Now, since Netflix, unlike other streaming sites, only streams seasons of shows that aren't currently airing, the spoilers aren't too much of a spoiler — that is, there's a good chance you've already seen or heard what happened.

For example, the site spoils the shooting of character Mike Delfino in the ABC show "Desperate Housewives."

That happened in the show's eighth and final season in 2012. In fact, New York Daily News notes the bombshell had actually been leaked prior to the episode airing.

Basically, we're not quite sure how spoiler-y these Netflix spoilers really are. So why create the website?

The streaming site teamed up with Harris Poll to look at how people perceive spoilers. They found 1 in 5 Americans are fine with learning big plot twists before watching the episodes, and hearing a spoiler makes about 13 percent want to watch a show they hadn't already been watching.

The New York Times spoke with cultural anthropologist Grant McCracken, who says he noticed people started spoiling shows around a decade ago when more television series and movies started having more complicated plotlines. He said, "The power of this new television was so intense that it was driving people to make these public declarations."

McCracken told The Huffington Post: "These days, spoilers can actually end up recruiting for the show. They send you a message that it's really good — that people really care about it and that you might want to watch it too."

And that's what Netflix seems to be banking on.

It hopes a person will watch a spoiler about "House of Cards" — hint, it's from season two — and then go to its streaming site and start watching the series.

Netflix is currently the most popular streaming site in North America. Earlier this year, Time reported the service accounts for "34 percent of peak wired download traffic in North America."

But other streaming services, like Amazon, are inching closer to that top spot. CBS reported the company said hits like "Downton Abbey" and "Veronica Mars" were causing them to see an increase in streaming.

Seems like Netflix is just trying to stay ahead of the pack. Its new site offers spoilers for a variety of television shows and movies such as "The Hunger Games," "Breaking Bad," "Ghostbusters" and "Lost."

So, are spoilers OK, or do they totally wreck the show? Tweet us @NewsyVideos.