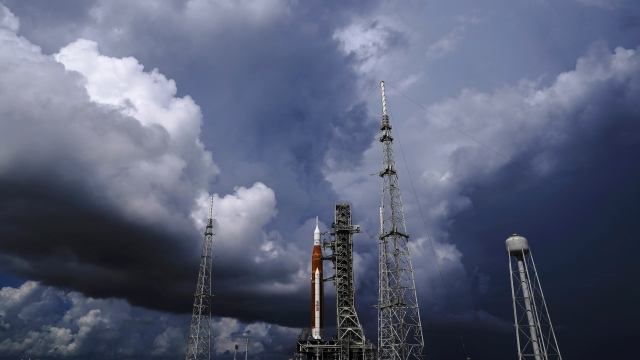 NASA has spent weeks preparing to launch its Artemis I rocket. It will be a key first step in U.S. efforts to embark on a manned mission to the moon in 2025.

This mission has two big new things: one is that it's committed to putting the first woman and first person of color on the moon, and the other is that NASA is planning to use information from this mission to prepare for a future mission to Mars. It's the first launch that will use NASA's Space Launch System, or SLS.

But even getting off the ground has taken a while.

On Monday, NASA had to roll back the rocket ahead of an expected hit from Hurricane Ian later this week, and that's just the latest in years of backups.

Planning for the Artemis mission began in 2017 and was originally scheduled for a late 2021 launch.

The SLS has been in development since 2011 and was required by Congress to launch in December 2016. However, an array of delays have pushed it potentially to late 2022.

The launch was set to go in late August, but was delayed due to problems with leaks of exotic fuel. NASA has used an extremely cold, liquefied version of hydrogen to power SLS rockets and the Artemis program.

Artemis 1 is set for a Monday liftoff from Kennedy Space Center, with mannequin stand-ins testing if the rocket can send humans back to the moon.

Jim Brenner, an engineering professor and liquid hydrogen expert at Florida Tech, said it's a decision that broke from what private spaceflight firms like SpaceX and Blue Origin have done. NASA chose hydrogen over natural gas like methane or kerosene because they decided to prioritize using a more powerful fuel over being able to reuse their rockets. But because of the extreme and very specific conditions needed to store hydrogen, it comes with a big challenge.

"The challenge is when you're storing very cold liquids," Brenner said. "The temperature associated with that can make the metal containment brittle. The temperature for liquid hydrogen is way, way below room temperature, and that is the biggest problem."

Hydrogen can be pretty sneaky, and when it comes in contact with a metal surface, it can break down into atoms, make the metal more brittle and diffuse its way to the other side.

"Artemis, in this case, was somewhat of an unlucky situation," Brenner said. "But it's not the first time, and it won't be the last time that NASA's had problems with hydrogen, liquid hydrogen. It's part of the problem."

Last Wednesday, Artemis passed a major hurdle when NASA's launch teams found that they met all their objectives in cryogenic testing. Liquid hydrogen leaked at a low enough level that they were able to move forward.

Once launched, the crew capsule atop the rocket will be the first to orbit the moon in 50 years.

But why is this a problem for NASA?

"It's a new vehicle," Malik said. "NASA is putting it together from spare parts from the space shuttle era, so they needed to make sure that they took these old engines. The engines that are on Artemis I are the ones that powered the space shuttle. They changed how they work with new controllers, so there's a lot of a lot of stuff that had to be tested all by itself that added to these delays."

Now, a lot of NASA's limitations are set into laws that specifically outline what the programs can and can't use.

"When the Space Launch System was approved, it was approved by Congress," Malik said. "It's written into law that NASA will build a rocket that will be this tall and use these types of engines and use these boosters from the space shuttle and be built in these different places. That really adds a lot of limitations to what NASA can do to cut costs, to get things done faster."

A big issue here is what is known as cost-plus contracting. In essence, the government pays a contractor a sum but also agrees to still pay for cost overruns and unanticipated costs.

NASA used that approach in the building of the SLS program, and administrators in the agency are raising the red flag.

NASA administrator Bill Nelson testified earlier this year that cost-plus contracts were "a plague" on the agency, and former NASA deputy administrator Lori Garver told Newsy she thinks it's constrained NASA's ability to keep up with private spaceflight companies.

"NASA's way of contracting is similar to what is done at the Pentagon with what we call cost-plus contracting," Garver said. "That means that a company is really not incentivized to reduce the costs or even do their projects within a set period of time, because delays just mean you get paid more for longer periods of time."

With the delay in the last week of September, it's clear factors well beyond the rocket itself can cause launch slowdowns. Even when technical issues are fixed, weather can play a role.