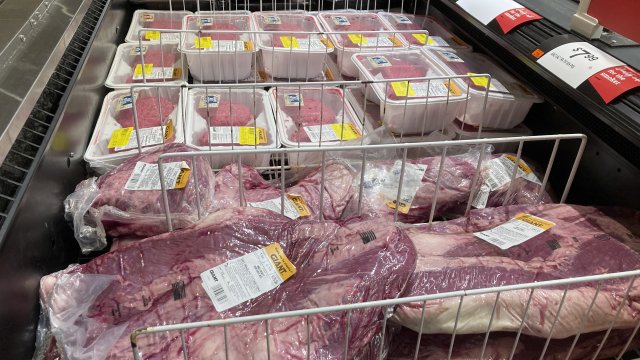 Inflation is the average rate that prices of goods and services rise over a period of time.

To see how fast prices are rising, everything from haircuts to the cost of a case of beer are closely monitored by statistical bureaus.

These price changes are entered into a calculator to give a single percentage number — the rate of inflation.

This number helps governments set welfare payments and helps you decide how much to ask your boss for a pay raise.

During a steady economy, prices typically rise steadily — traditionally, by one or two percent a year.

But sometimes, these numbers go above normal levels.

The inflation rate in the U.S. Peaked to 8.5 percent in March. Last March, it was at 2.6 percent.

According to Bloomberg’s analytics, the average U.S. Household is spending about $400 extra per month as a result of inflation.

And if you’ve been house shopping this past year you know it’s no picnic.

But where most consumers are seeing the difference is at the grocery store.

According to the Department of Agriculture, food-at-home prices are up 5 to 6 percent.

A lot of that is because we’re losing a lot of grain, soybean, and corn production in Russia and Ukraine due to the war.

Other global leaders are facing the inflation challenge as they work to recover from the pandemic.

60 percent of the advanced economies in the world have inflation above 5 percent.

In the United Kingdom the inflation rate peaked to 7 percent in March — the highest in 30 years.

The Federal Reserve’s job is to keep the U.S. economy stable.

When the economy is heavily impacted such as with inflation, the fed typically steps in and uses its main tool — raising interest rates — to help cool down the economy.

First it sets short-term borrowing rates for commercial banks, and those high interest rates are then passed down to businesses and consumers.

Chairman Jerome Powell recently announced an even more aggressive interest rate hike to fight inflation, by increasing its benchmark rate by half a percentage point.