Why Is Bill Gates Drinking Water Made From Poop? 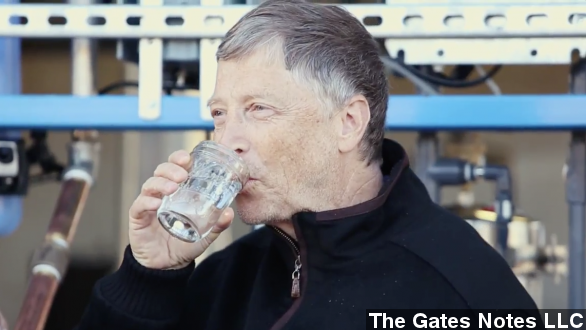 SMS
Why Is Bill Gates Drinking Water Made From Poop?
By Mikah Sargent
By Mikah Sargent
January 7, 2015
Janicki Bioenergy, backed by the Gates Foundation, has created a processing plant that turns human waste into clean water and electricity.
SHOW TRANSCRIPT

So why build a poo water facility in the first place? Gates, in a blog post about the Omniprocessor explained the motivation for the project:
“Waste contaminates drinking water for millions of people, with horrific consequences: Diseases caused by poor sanitation kill some 700,000 children every year, and they prevent many more from fully developing mentally and physically.”

And dealing with these sanitation issues isn't as simple as building a bunch of toilets. Turns out that's already been tried.

LiveScience quotes author Rose George who said, "People not necessarily wanting latrines was proved in India when the government provided millions almost free in the 1980s, and then millions of these kind-of-adequate latrines got turned into goat sheds or storage areas, because people are used to just going and crapping in the bush."

That's why the Omniprocessor not only produces clean water but burns the human waste, turning it into a sanitized ash.

And if clean water and sanitation isn't interesting enough for you, here's something awesome: the machine powers itself.

As the machine boils, burns, and processes the human waste, it produces steam. The steam powers a steam engine generator that produces electricity — enough to power the machine and then some.

Janicki Bionergy, the company behind the Omniprocessor, will soon begin a pilot project in Senegal. You can learn more about the project on Gates' blog.