Why Is Big Tobacco Voluntarily Warning You About E-Cigs? 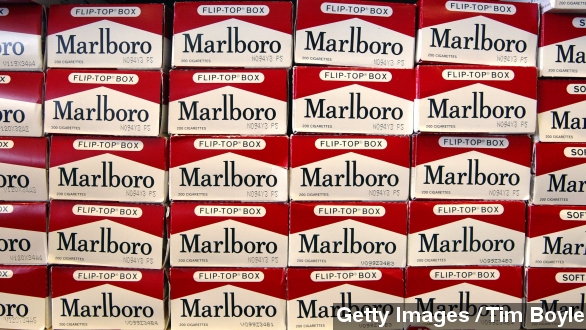 SMS
Why Is Big Tobacco Voluntarily Warning You About E-Cigs?
By Amy Kluber
By Amy Kluber
September 29, 2014
Big tobacco companies are voluntarily printing health warnings on their e-cigarette packages — a move some are calling part of a PR strategy.
SHOW TRANSCRIPT

If you've ever seen a cigarette pack, you might be familiar with the surgeon general's warning printed on the packaging.

E-cigarettes also owned by big tobacco companies come with warning labels, too, but they're not mandated by law.

Three of the largest companies — Philip Morris, Reynolds American and Lorrillard — all have their own e-cigarette brands.

Tobacco manufacturers have largely fought against tobacco legislation they say has hurt the industry since the first labeling and advertising mandate passed in 1965. But now they've voluntarily begun printing warnings for e-cigs, although there are no legal requirements to do so. So what's going on here?

The New York Times characterizes the elaborate labeling as a business strategy rather than a move that comes out of concern for public health.

"The e-cigarette warnings are a very low-risk way for the companies to insulate themselves from future lawsuits and, even more broadly, to appear responsible, open and frank."

Think about it. By including the same warning labels found on cigarettes boxes, large tobacco companies look like responsible corporate citizens. (Video via CBS)

Though that assumes the average customer would even know this was a voluntary effort by big tobacco companies.

And in any case, some experts say warning labels might not even matter anyway — claiming many times they're ignored by the smokers they target.

Although the warning labels on e-cigs admit they can be harmful for your health, there are studies that show the debate surrounding them is not going to burn out anytime soon.

The most recent surgeon general's report for the first time suggested nicotine products, including e-cigarettes, might be a better alternative — especially when someone cannot quit smoking entirely.

But many experts are challenging the e-cig health claims. Some states and countries are even considering expanding their smoking bans to include e-cigs.

Although the safety of e-cigarettes is still contested, it's widely accepted in the scientific community that smoking tobacco contributes to negative health effects.

This video includes images by Centers for Disease Control and Prevention / Debora Cartagena and Getty Images.