Why Iran Nuclear Deal Is An Urgent Issue For President Obama 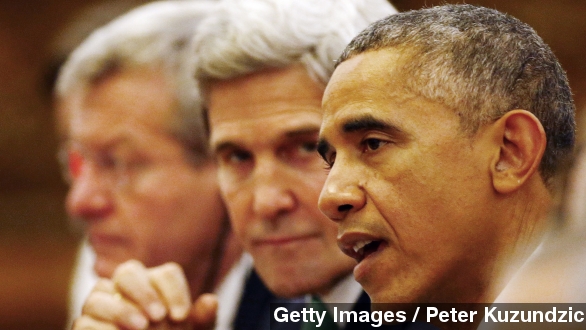 The deadline on a nuclear deal with Iran is inching closer, and President Obama is now facing a potential threat to negotiations from home.

Basically, the U.S. and European Union want to stop Iran from any sort of progress on making a nuclear weapon, and in exchange they're willing to suspend some of the numerous sanctions on the Middle Eastern country. (Video via ODN)

Now the president faces a class of incoming Republican members of Congress, led by likely Senate Majority Leader Mitch McConnell, who aren't too hot on suspending sanctions on Iran and could look to derail any potential deal. (Video via Voice of America)

At least that's the argument some outlets are making, like CNN, which argues Republicans would be particularly obstinate given their perceived mandate: "Republicans — long skeptical of the talks — are increasingly furious that Obama might sideline Congress to finalize an accord."

But some outlets make it seem like congressional opposition to talks with Iran and potentially lifting some sanctions is more politically motivated.

In particular, as Politico points out, Republicans could be eager to shut down the president's negotiations because a nuclear deal with Iran would constitute one of "Barack Obama's few remaining chances for a second-term policy legacy."

That "legacy" word is important because foreign policy is often a popular area for second-term presidents trying to cement their place in history, and the president's trip to Asia immediately following the elections seemed particularly significant to some. (Video via The White House)

In fact, the word "legacy" was all over coverage of the president's trip, with many outlets pointing to a possible trade deal as another opportunity for the president's legacy.

And Republicans might ultimately need to get involved if they want to trounce the president's Iran plan, because even though the outlook on current talks doesn't look great, some analysts argue the president still has momentum.

BOBBY GHOSH VIA CNN: "Deadlines can and have in the past been changed. ... In January you will have a Republican Congress and the Iranians know that once that happens, that's also going to undermine the chances of a deal, so there's a lot of pressure on them to do a deal quickly."

That current deadline is Nov. 24, when the current interim yearlong deal with Iran expires.