Why Gov. Jay Inslee Is Going All-In On Climate For Presidential Run 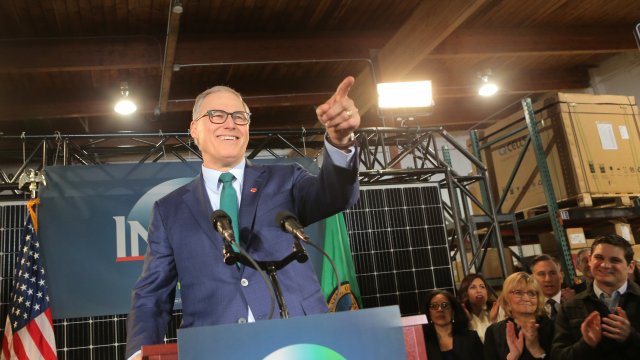 SMS
Why Gov. Jay Inslee Is Going All-In On Climate For Presidential Run
By Tyler Adkisson
By Tyler Adkisson
March 5, 2019
Inslee's environmental track record is pretty strong, and he's hoping that it can separate him from an already-crowded field of candidates.
SHOW TRANSCRIPT

Washington Governor Jay Inslee is just one in an ever-growing pool of Democratic presidential hopefuls, but his campaign's central message is helping him stand out: So far, Inslee is the only candidate to make climate change the central component of his agenda. His track record as a governor probably helps.

Inslee has spent years to make Washington one of the greenest states in the union. In 2017, he co-founded the U.S. Climate Alliance, a group of 17 governors who promised to keep working toward the Paris Climate Agreement. The League of Conservation Voters even referred to him as "our nation's greenest governor" in 2017. 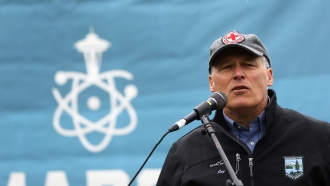 But Inslee has also struggled for years to enact a carbon fee in his own liberal state. In 2016, Inslee opposed a ballot measure that would have taxed carbon emissions, partly over worries that it wouldn't bring in the expected revenue. Inslee and his allies tried to rework the measure as a bill in 2018, but couldn't get it through their own Democratic-controlled state senate. It was floated a third time as another ballot measure, but again fell 17 points short of passing.

Even as he runs, Inslee is still pushing for stronger green energy initiatives for his state. In late 2018, Inslee announced legislation which would push local utilities to move away from all coal power by the end of 2025. That bill has already passed the Senate, and is now awaiting approval from the House.