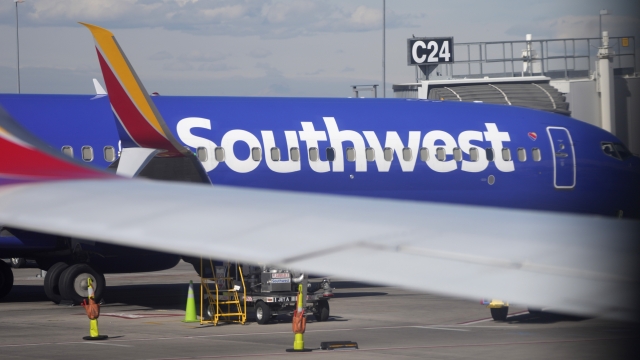 A congressional report in 2019 warned the Pentagon faced a shortfall of over 3,000 pilots which it states has been "several years in the making."

Captain Dennis Tajer has taken to the skies as an airline pilot for over 20 years. He’s also the spokesman for the Allied Pilots Association and represents 15,000 American Airline pilots.

"This has been in the air for a long time and no one did anything about it," said Tajer.

He says the pandemic exacerbated a staffing problem carriers knew about by offering early retirements in what he calls a money-saving move and then failed to plan for a return to normal.

"They kept us from collapsing they weren't ready for the recovery," said Tajer.

Airlines were looking to save money during the 2020 pandemic shutdowns. The federal government stepped in with aid under the condition airlines couldn’t lay people off or furlough anyone.

"And then they took a hundred airplanes at American and they retired them permanently, they didn't train pilots to go on new airplanes, and of those who retired they did not train their replacements," said Tajer.

But things changed a year later as Americans started to travel again and airlines added routes.

In 2021, the airline industry expected an increase of 42% in routes compared to 2019, according to data from Cirium Innovata a database tracking flight schedules across airlines. More flights means more pilots to get passengers to their destination. But hiring more pilots doesn’t come without turbulence. In the past, airlines have turned to the Air Force as a pipeline to bring in pilots. But they’re also facing a shortage.

A congressional report in 2019 warned the Pentagon faced a shortfall of over 3,000 pilots which it states has been "several years in the making."

As flight attendants continue to picket amid contract negotiations, the FAA announced a long-coming rule to require more rest between shifts.

"It was rare at the majors depending on the airline to find someone who wasn't prior military. It was just the pipeline that was there everyone knew with the fall of the wall and the Soviet Union collapsing that the military wound down," said Tajer.

The FAA requires commercial pilots to log 1,500 flight hours for certification. And obtaining a commercial license after that isn’t cheap.

We looked at three different flight schools. The price for a commercial pilot’s license ranged between $30,000 to nearly $100,000.

"What young man or woman is thinking hey I'm gonna go drop a hundred grand maybe make it maybe not for a job that will come. And go I'll be laid off there will be bankruptcies I'll be unemployed if you're looking at this as a business decision other than I just wanna fly what a horrid investment," said Tajer.

But some airlines are taking matters into their own hands. Phoenix-based Mesa Airlines recently purchased nearly 30 planes to help pilots build time toward their airline transport pilot license while trying to build a recruiting pipeline.

And American, United, Delta, Southwest, Frontier and others are spearheading similar initiatives. Washington is also working toward a solution. In July, Republican Nebraska Senator, Deb Fischer, introduced the Let Experienced Pilots Fly Act. It would raise the retirement age from 65 to 67 — though pilots would only be allowed to fly within the U.S. — with new emphasis on solving the issue.

Tajer believes it’s going to take time to get more new pilots in the cockpit.

"So, its gonna take a while and theres no magic switch. It takes a series of switches and everybody working together to get it done," said Tajer.

Which means, for now, travelers and pilots are left having to pack their patience.