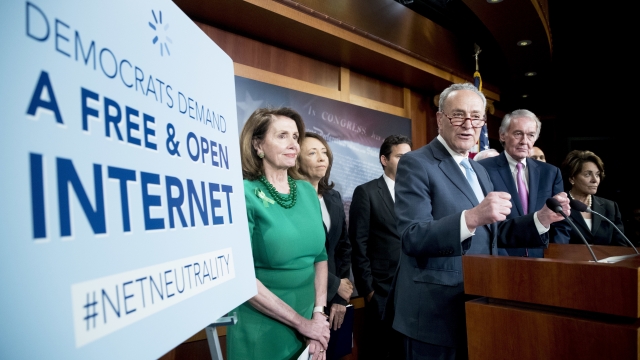 Net neutrality is the principle that internet providers should treat all traffic going through their systems equally.

The Biden administration has been steadfast in its efforts to bring back net neutrality — a kind of leveling of the internet.

In a July 2021 executive order, President Biden urged the Federal Communications Commission to do it, but progress toward reinstating net neutrality has been driven to a near-halt even though it’s supported by 80% of Americans.

So what’s the holdup?

First, what exactly is net neutrality? At its core, net neutrality is the principle that internet service providers like Comcast or Verizon should treat all traffic going through their systems equally. With net neutrality rules in place, providers would be prohibited from intentionally slowing the speed of access to websites, or outright blocking that access.

The biggest issue impeding net neutrality is that the FCC hasn’t been operating with a full commission and has been deadlocked along party lines. President Biden’s nominee, Gigi Sohn, has not been confirmed yet, but reports indicate she could be as early as the week of Jan. 24.

"The two-two split has stalled a lot of action at the FCC — only one of which is net neutrality," said Chris Lewis, president and CEO of Public Knowledge.

The sooner there's a five-person commission, the sooner net neutrality rules can be restored.

Lewis told Newsy that shutdowns during the pandemic have accentuated the need for reliable broadband internet backed by net neutrality rules. Currently, without those rules, the FCC can’t step in during an emergency, like the pandemic, to make sure people aren't cut off from broadband.

"There are currently examples of practices that broadband providers have conducted that would have been tested and challenged under the net neutrality rules, as we had them before, where they've blocked or throttled traffic over the past few years," Lewis said.

Some providers resist net neutrality, rejecting government intervention as bad for business and innovation. They tout consumer choice in offering faster service at a premium and allowing companies a way to get better placement.

Still, even without net neutrality rules in place, internet speeds have drastically risen for most U.S. citizens, and demand is rising.

In 2021, national average internet speeds doubled over 2020 to nearly 100 megabits per second.

It's a mixture of faster speeds now available due to emerging technologies like 5G and fiber, and also just the fact that more people are working from home, leading more people to recognize it as a necessity.