Why Ghana World Cup Fans Are Requesting Asylum In Brazil 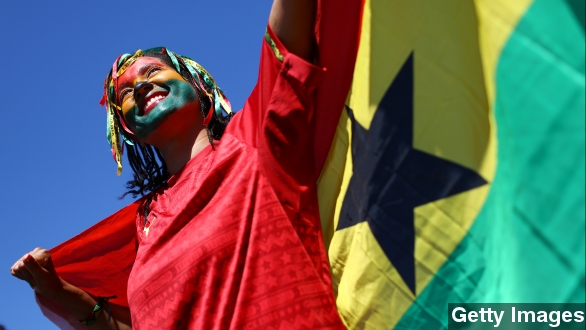 By Mikah Sargent
July 11, 2014
Nearly 200 Ghanaian soccer fans have requested asylum in Brazil, citing religious conflicts in their country. But could the group be looking for jobs?
SHOW TRANSCRIPT

Nearly 200 Ghanaians have requested asylum in Brazil after visiting the country to watch the World Cup. (Via Getty Images, Getty Images)

According to the BBC, police say these Ghanaian Muslims are requesting asylum to flee "inter-religious conflicts in their home country." (Via Getty Images, Getty Images)

The fans reportedly filed for asylum in Caxias do Sul and are currently taking shelter in Roman Catholic churches in the area. (Via Google)

The group made headlines last week after failing to return to Ghana via flights organized for their return. Of the 600 Ghanaian fans who came to Brazil, nearly half failed to return home. (Via Allsports)

​But there might be a different motive at play here. One BBC journalist stationed in Ghana says the country has no history of religious conflict.

According to the latest U.S. International Religious Freedom Report, the Ghanaian constitution protects religious freedom in the country, and there were no reports of government abuses of religious freedom. (Via U.S. Department of State)

And several sources are reporting the area where the fans have requested asylum is known for its employment opportunities.

Al Jazeera quotes one member of the Roman Catholic Church's Migrant Support Center who said the Ghanaians "feel they can find work and better living conditions in Brazil."

For what it's worth, the Ghana Broadcasting Corporation echoes that belief, writing, "Brazilian authorities believe many of the people are looking for the right to work legally in the country."

The group awaits asylum approval by Brazil's Ministry of Justice. Until then, the Ghanian soccer fans are allowed to work in the country.