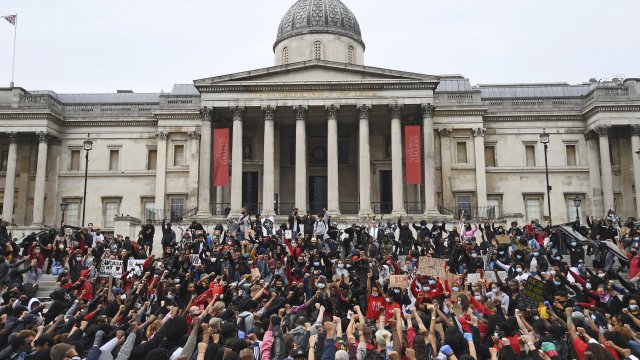 SMS
Global Outrage: Why George Floyd's Death Resonates Beyond The U.S.
By Ben Schamisso
By Ben Schamisso
June 4, 2020
Thousands of people around the world are protesting racism and police abuse under Floyd banner.
SHOW TRANSCRIPT

Anger over George Floyd's death is reverberating loudly around the globe. Thousands of people worldwide are protesting racism and police abuse in their home countries under Floyd banner.

In Paris, 20,000 people on Tuesday showed support to U.S. protesters and denounced the 2016 death of a Black man in French police custody. The case is still under judicial investigation.

"There's over 400-plus indigenous deaths in custody that are not being investigated or any further," said Tanesha Bennell, an Australian protest organizer.

So how did Floyd's death in U.S. police custody spark such a massive international movement?

"What's happening in America is just a more extreme version of what's happening around the world," said Kehinde Andrews, a professor of Black studies at Birmingham City University in England.

He says the video of the incident struck a nerve among minorities across the globe because it was all too familiar.

"There's huge problems in Europe, the U.K. in particular, with police brutality. So, you know it feels close to home," Andrews said.

Andrews says European countries tend to look at racial conflicts in the U.S. to better understand what's wrong with their own societies.

"America is this perfect place where you can just see the reality of racism," he said.

Thousands of people demonstrated in London twice this week following Floyd's death. The sustained outrage in the U.K. makes sense to Andrews. He says minorities on both sides of the Atlantic feel increasingly oppressed.

"Generally, If you look at the people leading America and Britain: very right-wing, very openly aggressive in their posture towards immigrants and on race issues. When you have someone — what Malcolm X called the wolf — who is just openly in your face telling you how it is you're more likely to respond," Andrews said.

And then, there's America's soft power. Terence Fitzgerald of the University of Southern California says international protest movements often start in the U.S. He points to how oppressed populations have long used the U.S. civil rights movement as a blueprint for their own uprisings.

"We have been the leaders in terms of stretching, redefining this living idea of democracy, living idea of freedom, of equity, of equality," said Fitzgerald.

Fitzgerald says as a Black man, he finds the global outpouring sad and reassuring at the same time.

"More than anything it's, in a sense, comforting that you're not alone, that your struggle is — of course every struggle has their own story, but that you share in this bond of oppression," he said.