Why Free Tax Prep Is So Hard To Find 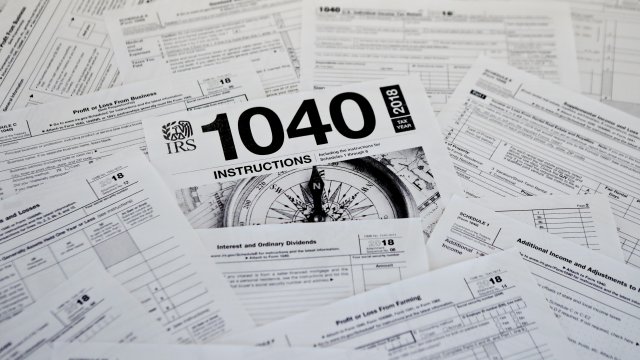 SMS
Why Free Tax Prep Is So Hard To Find
By Newsy Staff
By Newsy Staff
March 21, 2022
Tax-preparing companies have spent millions lobbying Congress to avoid simplifying the tax code and tax filing, according to ProPublica.

It’s tax season. After two years of delayed deadlines, the tax deadline has been moved back to April this year, on Monday, April 18 — just after Good Friday and Passover.

Regardless of whether you filed early or will do it closer to the deadline, you probably know that filing taxes can be a hassle.

It’s a system that raises some questions, to say the least. The IRS usually has all of the information you file, and the current tax filing system puts it on you to match its numbers.

Why is this all so hard? It’s part of a cycle driven mostly by the lobbying of large tax preparing services, and the tax code is complicated.

ProPublica’s reporting revealed tax preparing companies have spent millions lobbying Congress to avoid simplifying the tax code and tax filing so that everyday people filing their taxes will throw their hands up in frustration and pay for their services.

At the same time, anti-tax advocates — primarily conservative groups who want to fuel opposition to taxation — have pushed hard to defund government, specifically the IRS, and elect lawmakers who will do that and keep people angry at the tax system. An underfunded IRS struggles to fulfill its duties, especially when the tax code keeps getting more complicated.

So for the time being, we’re stuck in the clutches of a system that drives a lot of people to use paid tax prep services.

The IRS has a system called Free File, available on its website. It's open to any person or family who earns $73,000 or less. The agency estimates Free File is available to about 70% of tax filers, but the actual usage rate is pretty low.

But while the IRS can let you submit for free, getting outside help to understand the bevy of forms you need can be pricier. That's built into software like TurboTax, but the IRS can’t offer similar services, as part of the agreement the agency struck with tax preppers when it created Free File in the early 2000s.

The IRS does have a list of providers that offer free tax prep help if you meet certain qualifications, but the system is full of obstacles and each site has its own specific set of requirements.

Providers may try to funnel you into paid programs or force you into one if you get certain tax credits. If you try to find help yourself using a search engine, you might also find services that look a lot like they’re in the Free File program, but they actually aren’t.

And that can even stump the experts.

Beverly Moran is a professor emerita of tax law at Vanderbilt University. She has written six books and dozens of articles on the tax system and issues around tax filing. She puts her expertise to work, helping people file their taxes in order to find issues with the process, and even she found herself dealing with an imposter.

"I went on one of these sites that was not through the IRS website but appeared to be through the IRS website, and I went all the way through, filled out the return and then was told that I owed $29," Moran said. "Well, that's ridiculous. So I called the company, and they said, 'Oh, well, the person that you were doing this return for is eligible for the earned income credit.' Any time there's a credit, this program requires a payment, and it seems to me that virtually anyone who is eligible for that software, for that free software, was going to be eligible for the earned income tax credit. So they all would have had to pay."

As a quick explainer here, the earned income tax credit is a government benefit for lower income people that is delivered through the tax code. Estimates show one in five workers eligible for it don’t even file for it.

"When I finally got to the IRS website and I found another provider within the IRS website, I realized that the original provider that had wanted to charge had dropped a $1400 credit," Moran said.

Another potential solution to the problem is return-free filing. The government would calculate your taxes for you using all of your W-2 and tax forms, and then you could either accept the result or provide proof that you should pay less or get back more.

California piloted its own version of this approach to favorable reviews from tax filers. Joe Bankman, a Stanford University law professor, helped create the system.

"They know what your wages are because your employer already reported it to them," Bankman said. "So in California, we took that information, and we sent a pilot group a completed return and we also made it available online. And we said, based on what we know and on what you reported last year about your household status, how many kids you have and so on, here's what we think your return will look like. If this is right, hit correct, submit."

But it didn’t last long. California Republicans alleged, among other criticisms, the software could cost taxpayers money if it didn’t always maximize deductions. And, of course, we should mention that Intuit – the maker of TurboTax, which is based in California – spent over $1 million lobbying lawmakers as Ready Return was getting off the ground. So Bankman fought back, pouring in $35,000 of his own money to counter-lobby state legislators to promote the return-free system. He’s also advocated for it to members of Congress.

"When I went to California to try to fight into it, I thought, 'Well, there's only 120 legislators. I'll talk to them all one on one,'" Bankman said. "I found that in order to do it, I had to hire a lobbyist because I just couldn't handle the details or get the meetings. In Congress, when I went there, now there's 500 plus, and what I found everywhere I went is that Intuit had already preceded me. They'd already met the every representative I was going to meet."

So the current system lives on, and its complicated setup means lots of people who need help won’t get it.

Face-to-face help at IRS offices is largely limited to appointments only due to COVID.

The National Taxpayer Advocate, an internal IRS watchdog, found fewer than 10% of calls made by people to the IRS are answered during peak tax season, and that number factors in calls of any length.

At the end of the day, the current tax system is really profitable for a lot of people, but it's also really frustrating for a lot of Americans who have no choice but to participate.

"You can imagine if you're not too literate and you're not too numerate, maybe English isn't your first language, it is an enormous burden," Bankman said.