Why Former Massey Energy CEO Was Indicted In Mine Disaster 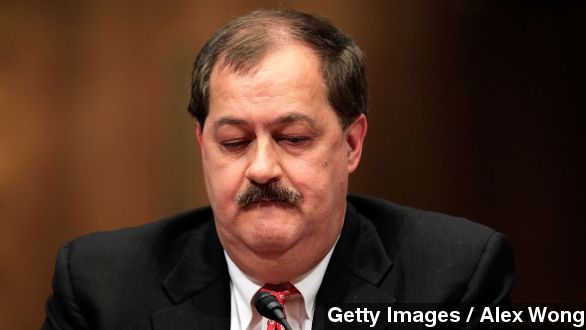 Donald Blankenship, the former CEO of Massey Energy, has been indicted by a federal grand jury.

The charges stem from a 2010 explosion at the company's Upper Big Branch Mine in West Virginia.

It's rare that a CEO would be held personally responsible for the violations of a company, as the indictment charges. But the indictment, and now the media, highlighted the peculiar — and documented — business decisions that separate Blankenship from the others.

Howard Berkes of NPR described what he called Blankenship's micromanagement of the mine. (Video via MSNBC)

"I mean, here he was CEO, a $2 billion-a-year company, and he's receiving reports every half hour about this one mine — the company has dozens of mines. He gets these reports at home; he gets them on weekends."

The Los Angeles Times highlighted a 2009 memo included in the indictment. In the memo, Blankenship tells the company's presidents: "Please be reminded that your core job is to make money. To do this, you have to run coal at a low cost, ship your orders and control your quality."

And The Wall Street Journal cited one of the more damning pieces of evidence, a handwritten memo from Blankenship to one of the mine's executives saying, "You need to get low on [the mine's sections] #1 and #2 and run some coal. We'll worry about ventilation or other issues at an appropriate time. Now is not the time."

The mine exploded due, in part, to poor ventilation about two years later. (Video via Fox News)

As you might imagine, Blankenship and the general public had very different reactions to the indictment.

Blankenship — who retired as Massey CEO later in 2010 and was speculated to have political aspirations — refuted the charges through a lawyer who released a statement saying: "Don Blankenship has been a tireless advocate for mine safety. His outspoken criticism of powerful bureaucrats has earned this indictment. He will not yield to their effort to silence him."

Family members of some of the coal miners who died in the explosion struck a different note. The sister of one of the miners told The Charleston Gazette: "To see him indicted means the system is working. To see him convicted would mean it has worked."

It's a reminder that this indictment serves only as a formal accusation that a person has committed a crime. Three former managers at Massey have been convicted and imprisoned since the investigation began more than four years ago.