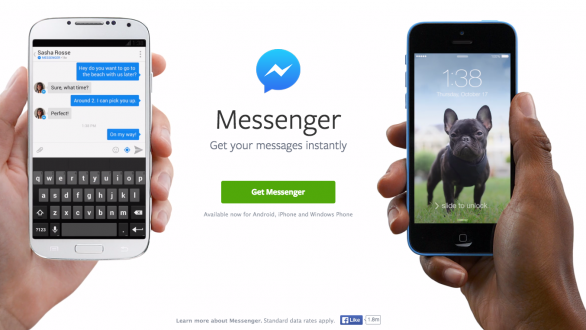 Another day, another app. Over the next few days Facebook will start requiring users to download its messaging app if they want to continue sending private messages.

The app, appropriately named Messenger, is a stand-alone application iOS and Android users can download. It will open up chat "bubbles" outside the Facebook application to allow users to chat with friends, place Internet-based phone calls, send photos and more.

This shouldn't really come as much of a surprise. Back in April TechCrunch reported that Facebook was going to remove messaging from the main Facebook app, and it started having European users make the switch back in April.

Despite some users expressing displeasure about the app becoming required, it has a four-star rating across the iTunes and Google Play stores. The application has more than 200 million users that send 12 billion messages a day. (Via Twitter / @tammy / @GSorensen / @belfastbiker / @markhoppus)

So why the sudden change? Well, one possible explanation is Facebook may try to monetize the app.

At least that's what ComputerWorld speculated back in June when Facebook hired former PayPal President David Marcus as head of mobile messaging. The site wrote, "It's clear the company is looking to further expand the use of its messaging apps, and maybe introduce monetization features."

Messenger isn't the only stand-alone app Facebook has had in the spotlight in recent months. Back in February it released the mobile news reading app Paper; then in June it unveiled the Snapchat competitor Slingshot.

Over the next few days Facebook users who use chat will receive a notice that chat will stop working and will be given a link to the Messenger app before Facebook chat stops working altogether.