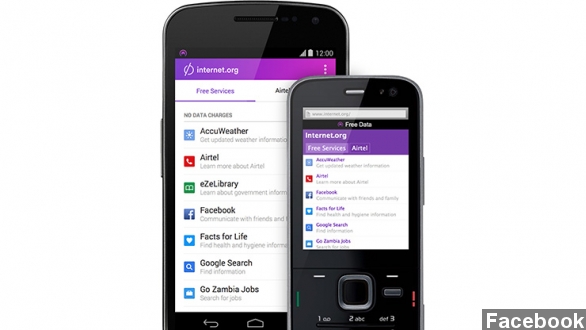 Facebook's Internet.org initiative — one aimed at getting the world's population online — is underway and it's all starting with an Android app. (Getty Images)

Facebook, in partnership with Indian carrier Airtel, will bring Zambians free access to a variety of services through its Internet.org app. Services include AccuWeather, Google Search, Zambian job listings, and Wikipedia to name a few.

Facebook notes "over 85% of the world’s population lives in areas with existing cellular coverage," but due to high costs or lack of awareness, "only about 30% of the total population access the Internet."

The social media company says it hopes free access will make more people aware of the value of the Internet, but there are probably a few ulterior motives at play.

The Wall Street Journal says Facebook has sold wireless carriers on the idea of offering free access by "arguing that some users would later buy a data connection."

So when a Google Search returns results outside the free services offered, Zambian users might be convinced to buy an Airtel data connection.

The outlet also points out both Facebook and its Messenger app are included in the Internet.org app, so "Facebook has the opportunity to be one of users’ first experiences on the Internet."

Currently only available to Airtel subscribers in Zambia, Facebook says it plans to bring the Internet.org app and its free data to other countries.

In the meantime, the Internet.org initiative continues work on its longstanding project to "beam Internet to people from the sky," using solar powered, Internet-enabled drones.