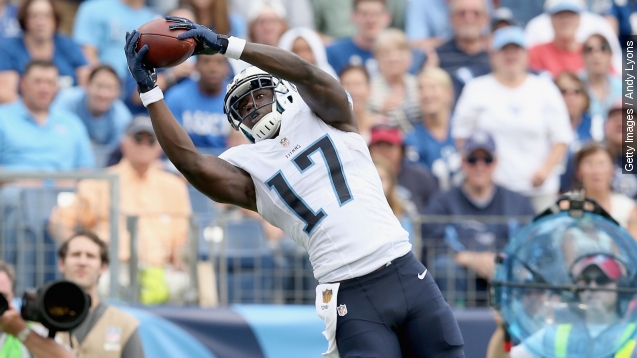 The NFL thought it went a whole calendar month without an active player being arrested for the first time since 2009. It was wrong.

So much for the NFL's monthlong streak of keeping active players out of jail.

Green-Beckham was pulled over for doing 65 in a 55. When the officer ran his license, he noticed the Titans wide receiver had a warrant for another unpaid speeding ticket — the sum of which was $92.48.

This is probably one of the least newsworthy NFL arrests in recent memory — that is, until you factor in when it happened and who it happened to.

NFL players' lengthy rap sheets have been the butt of jokes lately.

"Marvin Ingram. I was accused of sexual assault at the Ohio State University."

But an arrest-free September, the first calender month that's happened for the league since 2009, was welcomed PR.

"No active NFL players were arrested. ... Is this something to be proud of? I'm not sure," Jimmy Kimmel said jokingly on "Jimmy Kimmel Live."

And DGB's checkered past is noteworthy, too. What many saw as a first-round talent in the 2015 NFL draft fell to the second round after being kicked off the University of Missouri football team following multiple run-ins with the law. (Video via Exos)

"He's got the size, the range and all the athletic ability. It was kind of the off-the-field issues that they were most concerned with. He seems to be taking care of things off-the-field and on-the-field," CBS Sports analyst Brady Quinn said.

Looks like the NFL's "work days without an incident" counter needs to be reset.

Titans head coach Ken Whisenhunt told The Tennessean that Green-Beckham won't be punished for his arrest.