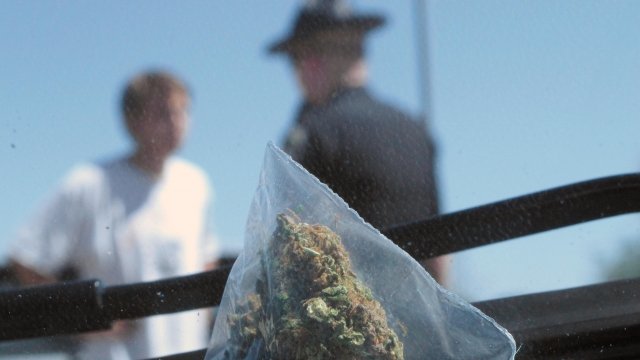 SMS
Why Doesn't A Test To Check For Marijuana Impairment Exist?
By Tyler Adkisson
By Tyler Adkisson
May 16, 2022
Though toxicology reports can show THC in a driver's system, no test exists to check if its levels are affecting their ability to drive.

The kind of tests and technology for detecting drunk drivers has long been standardized across the U.S., yet the same kind of widespread roadside test doesn't exist for marijuana impairment, despite 38 states allowing legal weed for recreational use or by prescription.

Typically, if you get pulled over and police suspect you're high, they can do a field sobriety test, use specially trained officers to make that call or run a toxicology exam. Field tests are often subjective, and toxicology reports may show the presence of THC in your system, but not whether you're inebriated.

"The pharmacokinetics of alcohol are relatively unique to alcohol," said Paul Armentano, deputy director of NORML — a non-profit focusing on marijuana law reform. "There's a linear correlation between the more one drinks, the higher their blood alcohol levels, and maximum blood alcohol levels being correlated with maximum impairment of performance. If we had those same linear correlations with cannabis and other substances, arguably we would have per se standard for them too. But we don't."

"Very quickly after someone smokes, it dissipates and disperses throughout the body," said Thomas Marcotte, co-director of the Center for Medicinal Cannabis Research. "Something like 90% of the THC is out of the blood within the first hour, hour and a half. The other challenge that law enforcement faces is when they draw blood, quite often it's an hour or two after the person's been pulled over. So if you look at our data and others data, by the time you're out a couple of hours, it's relatively low levels and may not reflect very well what was actually in the blood at the time of driving, let alone right after they smoked."

There is a push to use more performance-based technology to evaluate motor skills. One such tool, an app called DRUID, tests for things like hand-eye coordination to determine whether someone is fit to drive.

THC can impair driving, as it can slow a driver's reaction time and decision-making process.

A reliable roadside test is still far away, and experts told Newsy that before we get there, much more research needs to be done to determine how things like biological differences, intake methods and even alcohol combined with THC can affect drivers.

"One of the questions is whether it's an additive effect where one plus one equals two, you add them together, or maybe there is a synergistic effect where in combination there are even worse for you and adding them together," Marcotte said. "There are some data indicating that in the presence of alcohol, THC levels are higher. That's something we'll be trying to look at. It's not clear why that is."