Why Does Iran Hate The US? 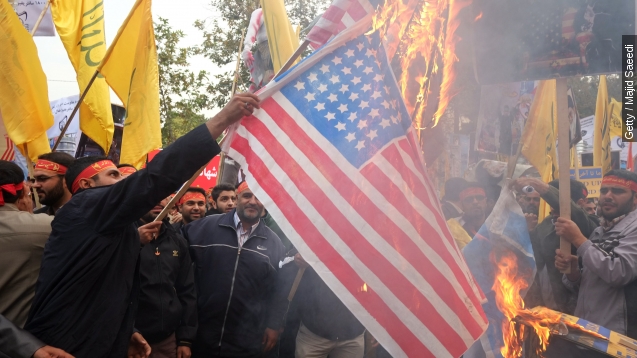 The negotiations over Iran's nuclear program have highlighted Iran's role as one of the U.S.' biggest foreign policy enemies. (Video via C-SPAN)

And while the Iran hostage crisis is often cited as the main reason for hostility between the two countries, to understand why it happened, we have to go to history. (Video via SABC)

As with so many conflicts with foreign interests in the Middle East, you can trace U.S. hostilities with Iran back to oil — specifically the discovery and exploitation of Iranian oil fields by British interests in the early 20th century. (Video via Press TV)

The company that would eventually become BP produced oil there until 1951 when Prime Minister Mohammad Mossadegh, with popular support, made the move to nationalize Iran's oil. (Video via German Federal Archives)

While that failed to provoke a military reaction from pacifist British Prime Minister Clement Attlee, British interests largely controlled the export of oil from the region and effectively put Iran's oil industry in a stranglehold.

That led Mossadegh to plead his case with U.S. President Harry S. Truman, but, at a time when the country was in the grips of McCarthyism, and with fears that Iran's left could push it toward the Soviet Union, Truman declined to intervene. (Video via CBS)

That changed when two more hawkish figures took charge in the following years: Winston Churchill in the U.K. and Dwight D. Eisenhower in the U.S.

The governments of both men worked together to support a coup in 1953 that deposed Mossadegh, and installed Iran's shah, Mohammad Reza Pahlavi, as the country's leader. (Video via BBC)

In the intervening years, the U.S. provided support to the shah, a key regional ally against the Soviets, even as popular opposition within Iran grew in the 1970s. That opposition ultimately culminated in the revolution, which deposed the shah in 1979. (Video via U.S. National Archives)

And when the shah was then admitted to the U.S., which refused to hand him over to Iran, the hostage crisis began and with it, U.S. sanctions. (Video via ABC)

Those sanctions, which continued after the hostages were released, coupled with the U.S.'s support of Iraq in the brutal Iran-Iraq war, which raged for almost eight years, all added to the antipathy Iranians felt for the U.S. (Video via ITN)

Since then, the U.S.' consistent support of Israel and Saudi Arabia has also pitted American interests against Iran, with the U.S. on the opposite side of what some have called a regional cold war. (Video via Office of Prime Minister Benjamin Netanyahu)

So when the June 30 deadline rolls around to come to a final nuclear agreement with Iran, the negotiators have a lot of history to work around. (Video via CCTV)

This video includes images from Getty Images, the Government of the United Kingdom, the U.S. National Archives and the Library of Congress.