Why Does Anyone Still Have Nuclear Weapons? 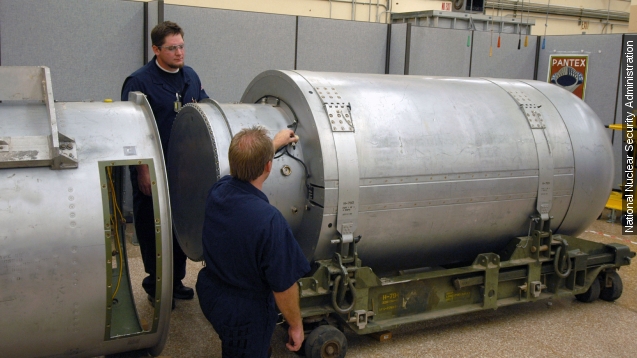 The main objective of the U.S. and its allies in the ongoing nuclear talks with Iran is to prevent the country from getting nuclear weapons.

But there are a lot of people who think nobody should have nuclear weapons, including the U.S. (Video via RT)

The most recent vote on a draft resolution for a nuclear weapon-free world passed 169 to 7. Those seven dissenters? All nuclear powers, including the U.S. (Video via United Nations)

"Today I state clearly and with conviction, America's commitment to seek the peace and security of a world without nuclear weapons," President Obama said in a 2009 speech in Prague.

A stance he won the Nobel Peace Prize for in 2009.

But it's less confusing compared against decades of American nuclear policy — using the threat of nuclear weapons to prevent other countries from using them or acquiring them. (Video via U.S. National Archives, History Channel)

So why hasn't significant nuclear disarmament happened? Mainly because the established nuclear powers can't agree on how to do it.

It's a lot like a classic standoff scenario, only it's not just the U.S. and Russia pointing the guns; it's peripheral powers as well, and pretty much everyone's trying to avoid something like this happening. (Video via Paramount Pictures / 'Face/Off')

As it stands, the U.S. and Russia are currently signed onto a treaty called New START, which dictates how the two countries will reduce their arsenals through 2021.

This video includes images from Getty Images, The Nobel Foundation and the National Nuclear Security Administration / CC BY ND 2.0.