Why Do Students Pledge Allegiance To The U.S. Flag? 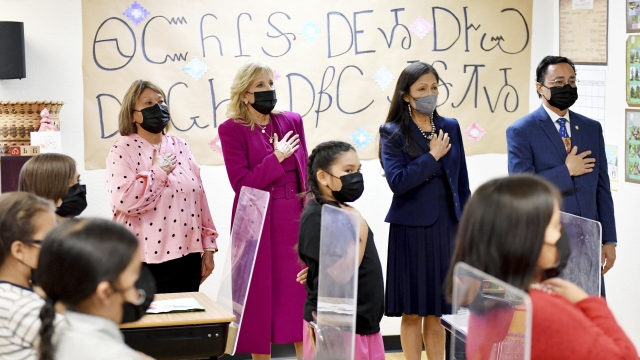 Students in the U.S. have been reciting the pledge of allegiance for decades, but why?

Each day across America, in classrooms big and small, at city schools and rural ones students recite the pledge of allegiance. But why?

Let's go back in time: It's 1892 and Chicago is preparing for the World's Fair, celebrating 400 years since Christopher Columbus discovered America. To promote the fair, a children's magazine called "The Youth's Companion" published a special edition with an early version of the pledge of allegiance.

There is some debate over who exactly wrote the words to that version, but what's important is that it made print. The magazine's executives lobbied Congress to mark a date for celebration, and President Benjamin Harrison proclaimed October 21, 1892 as a national day to commemorate Columbus' discovery.

"Let the national flag float over every schoolhouse in the country and the exercises be such as shall impress upon our youth the patriotic duties of American citizenship," said Harrison.

It previously said the pledge did not align with the district's diversity and inclusion code in part because "under God" does not include all faiths.

On that October day, tens of thousands of school-aged children across the country recited the pledge of allegiance in their classrooms. The tradition stuck in part thanks to an older generation aiming to teach patriotism following the Civil War, and one eager to instill a patriotic fervor in new waves of immigrants.

Today 47 states require students to recite the pledge in school, but there are varying exceptions. A 1943 Supreme Court decision ruled the First Amendment protects children from being forced to recite the pledge or being punished for not participating. Today students who choose to still have the chance to start their day with its 31 words.