Why Did ISIS Return To Kobani, A City It Lost Months Ago? 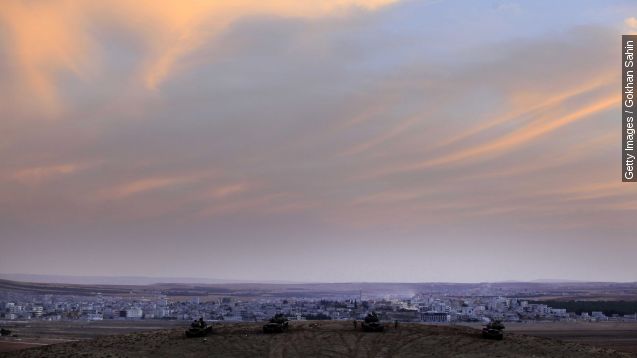 SMS
Why Did ISIS Return To Kobani, A City It Lost Months Ago?
By Jake Godin
By Jake Godin
June 25, 2015
ISIS launched an assault on the Kurdish border city of Kobani on Thursday. But why is the extremist group attacking a city it lost months ago?
SHOW TRANSCRIPT

Why is ISIS attacking Kobani again?

On Thursday morning, ISIS launched an attack against the Kurdish border town of Kobane, detonating multiple car bombs and killing dozens of civilians in one of its worst attacks in Syria since the formation of its so-called caliphate. (Video via TRT Haber)

Footage captured from a CCTV camera on Turkey's side of the border shows the detonation of one car bomb at the Turkish-Syrian checkpoint.

Fighting continued after the car bombs, with ISIS militants reportedly disguising themselves as Free Syrian Army rebels and YPG militiamen. A statement by the Kurdish militia said, in all, 30 ISIS militants were killed Thursday. (Video via People’s Protection Units)

The clashes continued into Friday, and the Syrian Observatory for Human Rights has so far counted a total of 120 dead civilians in Kobani and 26 in a nearby village. Two hundred have been wounded.

The death toll makes it the second-worst massacre by ISIS in Syria since it declared its caliphate last year.

If ISIS attacking Kobani sounds familiar, that's because it is.

The extremist group was on the brink of taking control of the city last year.

But it was ultimately pushed back after extensive U.S.-led coalition airstrikes targeted ISIS fighters in and around the city.

Kurdish forces soon secured not only the city but hundreds of villages in the surrounding countryside. (Video via People's Protection Units)

So months after being driven out of the city and surrounding area, why is ISIS now attacking Kobani again?

It's possible ISIS was trying to show it could still go on the offensive after its recent loss of Tal Abyad, a vital border crossing that was captured by a coalition of Kurdish and Free Syrian Army forces.

A spokesman for the Kurdish militia told The Washington Post's Liz Sly the attack was meant to divert attention away from the Raqqa front and boost the morale of ISIS fighters. (Vide via People's Protection Units)

ISIS’ Kobane offensive was accompanied by another attack in the northeastern Syrian town of Hasakah, a city jointly controlled by Kurdish and Syrian regime forces.