Why Debate An Economy Candidates Can't Control Or Predict? 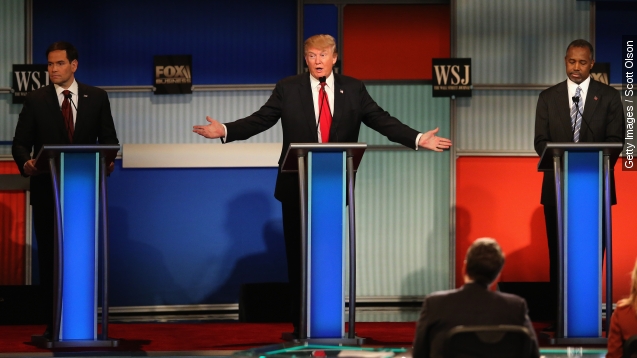 The economy has been a hot topic in the presidential debates.

"I'm worried about the finances of everyday Americans who today are struggling in an economy that is not producing good paying jobs while everything else costs more," Sen. Marco Rubio said during the CNBC debate.

"We can stimulate the economy; that's going to be the real growth engine," Ben Carson said during CNBC's Republican debate.

But there are two reasons that might ring hollow.

One, because the president's influence on the economy is questionable at best. And two, because nobody really knows what the economy will look like when the election rolls around in a year. (Video via The White House, NBC)

Unlike, say, the CEO of a company, the president can't make a ton of unilateral decisions, especially when it comes to monetary policy. That's controlled by the Federal Reserve, which doesn't need approval from Congress, or the president, or anyone, really. (Video via The White House, Federal Reserve Board)

Economists generally believe in economic cycles of boom and bust, influenced by a ton of different factors, like oil prices or productivity, which the president can't totally control. (Video via MSNBC)

And then there's the fact that the economy might look completely different by November next year.

Because of all the moving parts in an economy, economic forecasting can be pretty unreliable, especially over the long-term.

There's a sea of economic indicators, and even the most advanced models can be completely off the mark. Just look at the last financial crisis.

But despite all of that, there's one big reason candidates keep bringing it up: Voters care about it a lot.

The economy is regularly one of, if not the top issue that voters say they're concerned about, so it makes sense for candidates to talk about it, even if there's little they can do to affect it.