Why Companies Are Upset Over .Sucks Domains 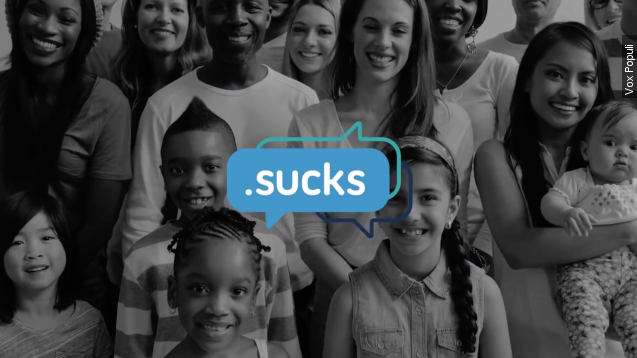 SMS
Why Companies Are Upset Over .Sucks Domains
By Matt Moreno
By Matt Moreno
May 20, 2015
Trademark holders have until the end of May before someone else has the right to buy their .sucks domain and make it live.
SHOW TRANSCRIPT

That's a pretty strong, sentimental ad in defense of the word "sucks," right?

"The word sucks is now a protest word."

But Vox Populi — the sellers of .sucks domain names — are getting strong opposition, especially from big-name brands.

And those big-name brands with big-time trademarks only have until June 1 to act before the widespread public can buy domain names and make them live. Part of the trouble is trademark holders don't exactly want their brands associated with a domain so negative and easily accessible.

For example, instead of going to Apple.com, you could almost just as easily go to Apple.sucks — a site that'd more than likely be critical of the tech giant.

We use Apple as an example because it actually tops the list of the company trademarks people are seeking. Google.sucks, Microsoft.sucks, Facebook.sucks and Comcast.sucks round out the top five.

Apple, among other big companies, have put up the cash to buy their domain and protect it from falling into the wrong hands, but that's not the only pain.

​"It seems like extortion masquerading as advocacy," Mark Spoonauer, the editor-in-chief of Tom's Guide and Laptop Mag, told KSAZ.

"I basically think it's extortion."

That last commenter was J. Scott Evans, associate general counsel at Adobe Systems. He says one of the biggest issues with the .sucks domain name is the price — $2,500.

That's a much, much steeper price than most non-dot-com names that generally go in the $100-a-year range.

But the only reason we're having this debate in the first place is because the Internet Corporation for Assigned Names and Numbers, the nonprofit organization overseeing the Internet's naming system, already approved it — approved it because no one disapproved of it while it was under consideration.

No objections until now, it appears.