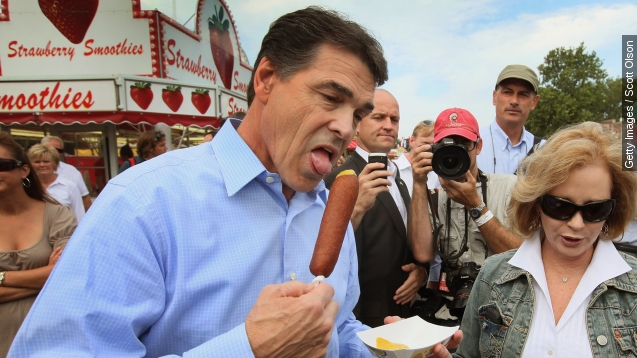 Or the cow sculpture carved solely from butter ...

The real attraction is the selection of foods available for consumption on a stick. (Video via IPTV)

There’s chicken on a stick.

Pork chop on a stick.

Deep-fried butter on a stick.

These dishes — while delectable —  never fail to produce a whole lot of unflattering photo ops for the presidential hopefuls who descend on the Iowa State Fair each year.

Though, to be fair, these politicians are in a horrible position. We ask for them to be regular folks — regular folks who will chow down on a foot-long corn dog. And yet, we demand they do it with some semblance of dignity.

And let’s face it. You can’t eat a foot-long corn dog in a civilized way. You just can’t.

So note to the 2016 candidates: If you plan to eat anything that’s deep fried and served on a stick, keep it at arm's length when in front of the cameras.

Or, might we suggest instead, choosing the slightly more manageable, bite-sized cheese curds.