Why Canada Wants A Weed Trade Deal With The U.S. 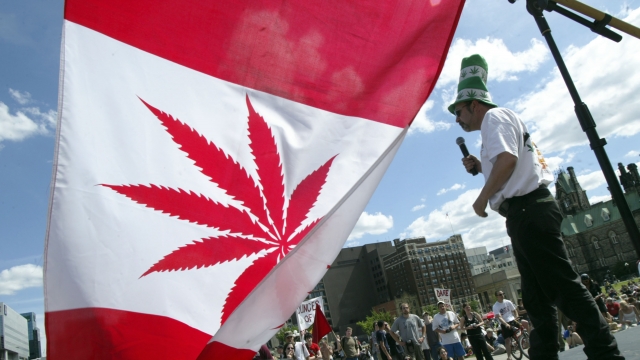 SMS
Why Canada Wants A Weed Trade Deal With The U.S.
By Kellan Howell
By Kellan Howell
May 1, 2019
Both Canada and U.S. states have a supply and demand problem when it comes to legal weed. Canadian lawmakers are hoping for a trade deal.
SHOW TRANSCRIPT

Canada made history in 2018 when it became the first G7 nation to legalize recreational marijuana, but soon after America's northern neighbor saw a growing problem in its new cannabis industry.

"The biggest issue that we faced in Canada is an unanticipated demand for a legal product, so shortage of supply. Problems with supply chain," Ontario Sen. Tony Dean said at a briefing with Congressional staff on Tuesday.

That dearth of legal weed has led to soaring prices, and while many are willing to pay higher prices for a safer product, the black market has continued to thrive.

Canadian lawmakers, though, have a solution: America.

A group of politicians and business executives traveled to Washington, DC to lay out the benefits of cannabis legalization to both countries. Among those positives would be the potential to import Marijuana from the US.

"I see nothing but opportunity in a cross-border sense from whatever form of legalization and regulation may occur at the federal level in your country," Dean, who sponsored Canada's federal legalization bill in the Senate, said in an interview with Newsy.

Although marijuana is still federally prohibited in the U.S., 10 states have legalized it for adult use, with several bordering Canada.

And several of these states are experiencing their own supply and demand problems complicated by laws that currently don't allow states to transport cannabis across state lines.

Nevada officials declared a state emergency in 2017 after dispensaries started running out of pot, and licensing delays in California could lead to shortages this year.

But oversupply in Oregon has led to a price crash on the legal market and hard times for marijuana farmers.

The state is sitting on more than 1 million pounds of usable marijuana that it hasn't sold and lawmakers have even proposed a measure to cap production.

Oregon legislators are already moving forward with legislation empowering the state government to make cannabis trade arrangements with other states, but they wont be able to export marijuana across state or international lines as long as weed is federally illegal.

Congress does have a couple of solutions in the works, including legislation to remove cannabis from the list of federally controlled illegal substances and regulate it like alcohol.

"I would see tremendous opportunities between two very solid neighbors with huge preexisting common interests both in terms of social equity and social justice, but also in terms of the economy," Dean said. "Think of auto trade between not just two countries but three countries whose borders coalesce."